Djokovic once had a reputation for retirements, seen graphically at the 2009 Australian Open when, as defending champion, he pulled out of his quarter-final with Andy Roddick citing exhaustion in the extreme heat. But Djokovic underwent a transformation. 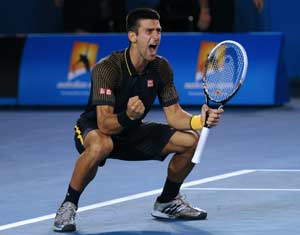 Novak Djokovic has reinvented himself from precocious but fragile talent to set new standards in men's tennis, raising the bar set by Roger Federer and Rafael Nadal.

The 25-year-old once had a reputation for retirements, seen graphically at the 2009 Australian Open when, as defending champion, he pulled out of his quarter-final with Andy Roddick citing exhaustion in the extreme heat.

But Djokovic underwent a transformation, dropping gluten from his diet and changing his training habits, and after helping Serbia win the 2010 Davis Cup he put together one of the finest seasons ever seen in 2011.

Jaws dropped, and kept on dropping, when he went 41 matches unbeaten at the start of the year, picking up seven titles along the way including his second Australian Open win.

Trophies at Wimbledon and the US Open followed as Djokovic finished the season with a 70-6 win-loss record, a haul of 10 tournament victories and as year-end number one for the first time.

The wins kept on flowing last year as Djokovic defended his Australian Open title and reached the French and US Open finals, and again finished the season as world number one.

But it was in the Melbourne final that he won his reputation as an iron man as, after a five-hour semi-final with Andy Murray, he came out on top of a record 5hr 53min final with Nadal, the sport's toughest battler.

"You know, Fed raised it; Nadal matched and raised it; Djokovic, for that intense little period of time, even raised it," commented American great Andre Agassi.

"It's been amazing watching the standard continually get better. You wonder how it's possible to continue at that sort of rate," he said.

At this year's Australian Open, Djokovic's amazing powers of recovery came into focus after he went five punishing sets against Stanislas Wawrinka, but showed no ill-effects in his quarter-final with Tomas Berdych.

After his near-perfect, 89-minute demolition of Spain's David Ferrer in the semi-finals, Djokovic found time to dress up as a doctor and amuse the crowd by pretending to examine Henri Leconte.

Details of his recovery programme are a closely guarded secret, but Djokovic insists there is nothing untoward.

"After five hours of match, you need to really put a lot of time into recovery, different kinds of recoveries. As I said, I understand that many people have many different views and opinions, and I respect that.

"But I'm doing everything that is legal, that is correct, that is natural that I can, possibly can in my power, and it's working well."

And after beating Murray, Djokovic displayed his renowned charm and largesse by personally handing out chocolates to journalists in the press room.

"Every tournament, especially the major tournaments, is very special," he said. "It's very thrilling. I'm full of joy right now. It's going to give me a lot of confidence for the rest of the season, that's for sure."

Comments
Topics mentioned in this article
Australian Open 2013 Tennis Roger Federer Stanislas Wawrinka Rafael Nadal David Ferrer Andy Murray Novak Djokovic Bernard Tomic
Get the latest updates on India vs South Africa and check out  Schedule, Results and Live Score. Like us on Facebook or follow us on Twitter for more sports updates. You can also download the NDTV Cricket app for Android or iOS.