Leander Paes' doubles partner Radek Stepanek underwent spinal surgery on Monday and will be out for an indefinite period. Paes said Stepanek had a back problem from last year itself. 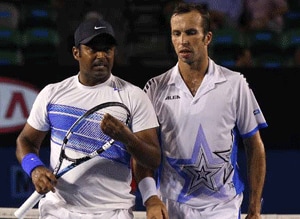 As a back surgery has pushed Radek Stepanek out of action, veteran Indian tennis player Leander Paes is looking for a new partner for a certain part of the 2013 season.

Paes had won Australian Open with Czech Stepanek last year to complete a Career Slam but their title defence this year fell apart due to latter's injury as they were shocked in the first round by Kevin Anderson and Jonathan Erlich.

Stepanek underwent a spinal surgery on Monday after withdrawing from next week's Davis Cup tie against Switzerland.

"Radek had spinal surgery on Monday. I have to look for partner for my bread and butter. Hope he (Radek) will be back soon," Paes said after joining the training camp for the Davis Cup tie against South Korea.

Paes said Stepanek had the back problem last year itself. "He has had a tough beginning to the year. We saw the symptoms showing up from the (2012) US Open onwards. Before the Australian Open, Radek pulled out of Brisbane event due to an eye infection. We got to Sydney, we won a round and then we had to pull out because of injury. We knew the extent of it, and that's what made Australian Open hard for us," he said.

Paes said he chose to go ahead with Stepanek at the Australian Open instead of looking for a new partner since he believed in standing by his partners.

"I had four other options to pair with me. But sometimes you have to stand by your partner. Yes, I did lose 2000 points, and my ranking went down from number 3 to 7. But, I love standing by my partners and I hope he (Stepanek) will be back soon. He's recovering and looking to start rehab towards the end of next week," he said.

Comments
Topics mentioned in this article
Australian Open 2013 Tennis Leander Paes Radek Stepanek
Get the latest updates on India vs South Africa and check out  Schedule, Results and Live Score. Like us on Facebook or follow us on Twitter for more sports updates. You can also download the NDTV Cricket app for Android or iOS.