Li became the first Asian to win a Grand Slam title when she triumphed at the French Open in 2011, but after that she struggled to adjust to her new status as a major champion. 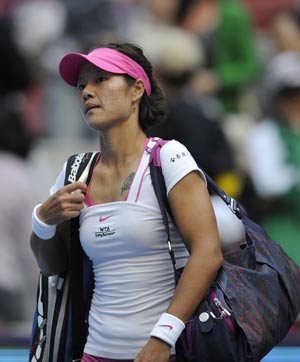 Chinese tennis boss Sun Jinfang on Sunday, gave the thumbs up to a gritty Li Na and expected the 30-year-old star to inspire more youngsters to take to the sport.

World No.1 Victoria Azarenka won an incident-packed final against an injury-struck Li to defend her Australian Open title Saturday but the Chinese fighter won the fans' hearts by battling hard against the Belarusian after twice twisting her left ankle.

"It's really impressive when Li stood up again and pulled off a courageous performance against her strong opponent," Sun was quoted as saying by Xinhua.

"The momentum was not on her side, but she's still sure of herself and never gave up. I must say Li has a big heart."

"It's a pity that she narrowly missed the Australian Open title. Li is still a role model for China. The Chinese young generation can learn from her example, take inspiration and follow in her footsteps," Sun added.

Li became the first Asian to win a Grand Slam title when she triumphed at the French Open in 2011, but after that she struggled to adjust to her new status as a major champion. For almost a year, she had not won a tournament and even found it hard to reach a final.

Li then changed her coaching set-up, switching to her husband from Denmark's Michael Mortensen, who helped her win the French Open, and now trains with Carlos Rodriguez.

The partnership with Rodriguez, who guided Justine Henin to seven Grand Slam triumphs, has proved a turning point and she first won her sixth WTA title in Cincinnati last September and then her seventh in Shenzhen early this month, and now she reached her third Grand Slam final.

"Li has been through a lot after the French Open victory," said the Chinese tennis chief.

"She needs time to adjust to the fame and also has to handle the enormous pressure. It's normal that she has ups and downs."

"I hope my story can inspire people of all ages," the Chinese megastar said during her book signing in Beijing.

Anna Kournikova's success in the late 1990s inspired a succession of Russians to follow heel and Li's consistent surge could have a similar effect in China.

"Li Na phenomenon will inspire many youngsters to pick up a racket and it's just a domino effect in terms of continuing the growth of the sport in China at a much faster speed," said Xia Xiyao, Li's former coach, who still works in a sports school in Li's hometown of Wuhan.

"It's not just at the grassroots level, Li's performance will easily attract investment from Chinese brands as well as multinational brands into women's tennis," she added.

Li has been flying the Chinese flag in world tennis for years and the new comers found it hard to catch up.

"Everyone is different," Li said in her autobiography. "I don't want them to copy completely from me. I believe that someday they can do even better than me," she had said.

Comments
Topics mentioned in this article
Australian Open 2013 Tennis Na Li Victoria Azarenka
Get the latest updates on Fifa Worldcup 2022 and check out  Fifa World Cup Schedule, Stats and Live Cricket Score. Like us on Facebook or follow us on Twitter for more sports updates. You can also download the NDTV Cricket app for Android or iOS.