After a week of setting age-related records and becoming the media darling of this year's Australian Open, the Japanese player bid farewell to the big stage for now after losing her third-round singles match on Saturday. 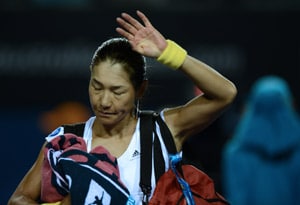 Kimiko Date-Krumm is as amazed as everyone else that she's still playing Grand Slam tennis at 42.

After a week of setting age-related records and becoming the media darling of this year's Australian Open, the Japanese player bid farewell to the big stage for now after losing her third-round singles match on Saturday.

In a sport dominated with women half her age, it was a great tournament for Date-Krumm.

This was her 43rd time playing a Grand Slam tournament - and she was the oldest woman in the draw by about a decade. The only other player who came close was 33-year-old Greta Arn of Hungary who lost quickly in the first round.

Date-Krumm is ranked 100th but defied the ranking system. She created a stir by beating No. 12-seeded Nadia Petrova - who is 30 - 6-2, 6-0 in the first round and becoming the oldest woman to win a singles match at the Australian Open.

Over the course of a week, she held court at packed press conferences and fielded questions about her secrets to longevity.

"Sleep a lot. Drink water a lot. It's nothing special," she said, noting that she's older than some of her opponents' mothers.

She recounted amusing conversations with her peers from the past, like Steffi Graf and Lindsay Davenport who retired years ago and have started families.

Date-Krumm's best result at the Australian Open came in 1994 when she reached the semifinals. She achieved a career-high ranking of No. 4 in 1995.

She admitted finding it tough to keep up with this generation of fitness fanatics whose raw power has changed the women's game.

"Everytime when I go to the gym, everybody is there, even before their matches, after their match," she said. "They're doing so much exercise. That's why women's tennis is changing compared to 10 years ago, 20 years ago."

When Graf was winning her 22 Grand Slams in the 1980s and 90s the game was more about technique, she said.

Date-Krumm, who is married to German race car driver Michael Krumm, took a 12-year break from tennis and returned in 2008. When she came back, she never planned to play at the Grand Slam level.

"So, yeah, it's a miracle I was in the third round this year," she said. "I'm very surprised myself."

Her stay in Melbourne is not quite over yet. She's still playing doubles, and has advanced to the third round with Arantxa Parra Santonja of Spain.

Resting doesn't seem to be on her agenda.

After Melbourne, Date-Krumm plans to return to Japan for a couple days before flying off for a packed schedule of tournaments that include Pattaya, Thailand, then Fed Cup, Memphis, Brazil, Indian Wells, Miami, Mexico.

In answer to the inevitable question: Will she be back next year?

Comments
Topics mentioned in this article
Australian Open 2013 Tennis Kimiko Date-Krumm Bojana Jovanovski
Get the latest Cricket news, check out the India cricket schedule, Cricket live score . Like us on Facebook or follow us on Twitter for more sports updates. You can also download the NDTV Cricket app for Android or iOS.