"It Isn't A Nightmare": How The World Reacted To India's Horror Batting Show In Adelaide

Cricketers -- past and present -- and fans were left shell-shocked as India could only muster 36/9 in the second innings, their lowest total in Test cricket. 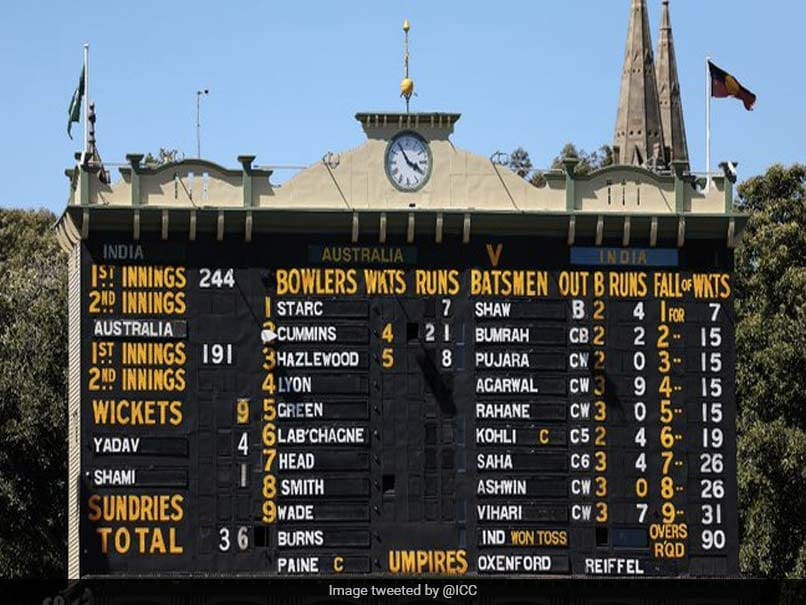 AUS vs IND: India, who were restricted to 36/9, posted their lowest-ever total in Test cricket.© ICC/Twitter

India faced the ignominy of being restricted to 36/9 in their second innings of the opening Test against Australia on Saturday. Incidentally, it happened to be India's lowest-ever Test score, beating the previous lowest of 42, set in 1974 against England at Lord's. This was also the first time in India's Test cricket history and the second overall that no batsman got into double figures -- Mayank Agarwal top-scoring with 9 runs. Josh Hazlewood took his eighth five-wicket haul in Tests while Pat Cummins took four as the Indian batting crumbled in the first session on Day 3. Australia went on to beat India by 8 wickets within three days to take a 1-0 series lead in the four-match series.

Twitter went into a frenzy following India's batting collapse, many left in shock with what had transpired in Adelaide.

It is happening. It isn't a nightmare....

With the way India batted & bowled in the 1st innings, they were in the driver's seat, but the Aussies came back really hard this morning.
That is the beauty of Test cricket.
It's NEVER over till it's over. India was outclassed in the 2nd half. Congratulations to Australia!

Staggering to witness. India start day 3 looking to build on a lead of 62 with 9 wkts in hand. All over in a session and a half. Pure class bowling. Burns sees through the chase. #AusvInd pic.twitter.com/aZRFu0KS4X

Lowest Test innings in 65 years and the equal-fifth lowest ever. Incredible. #AUSvIND

With just 36 on board in the second innings, Australia were left with just 90 runs to win the opening Test. Australia cruised in the chase, hardly breaking a sweat as Joe Burns announced his return to form with an unbeaten half-century.

India had ended Day 2 on pole position, having taken a 53-run first innings lead after bowling out Australia for 191.

India added nine more runs for the loss of Prithvi Shaw to end Day 2, sitting in the driver's seat. But all that changed in the fateful first session on Day 3. Cummins began India's collapse removing nightwatchman Jasprit Bumrah, followed by the big scalp of Cheteshwar Pujara.

Hazlewood joined his pace partner to take two wickets in his first over of the day. Cummins then coaxed Virat Kohli into going for a loose drive, leaving India in tatters at 19/6.

Hanuma Vihari put up a brief fight but Hazlewood and Cummins kept coming at the Indian players. India just about made it past the lowest-ever Test score of 26 but didn't get too far before Mohammed Shami was struck on his right forearm by a Cummins bouncer, bringing an end to the Indian innings.

Cheteshwar Pujara Australia vs India 2020-21 Australia vs India, 1st Test Cricket
Get the latest updates on IPL Auction 2023 and check out  IPL 2023 and Live Cricket Score. Like us on Facebook or follow us on Twitter for more sports updates. You can also download the NDTV Cricket app for Android or iOS.