Australia vs India: Virat Kohli's "Ridiculous" Shot Has AB de Villiers Written All Over It. Watch

India vs Australia: Virat Kohli grabbed the limelight following a scoop to long leg after going down on one knee in the second T20I against Australia in Sydney. 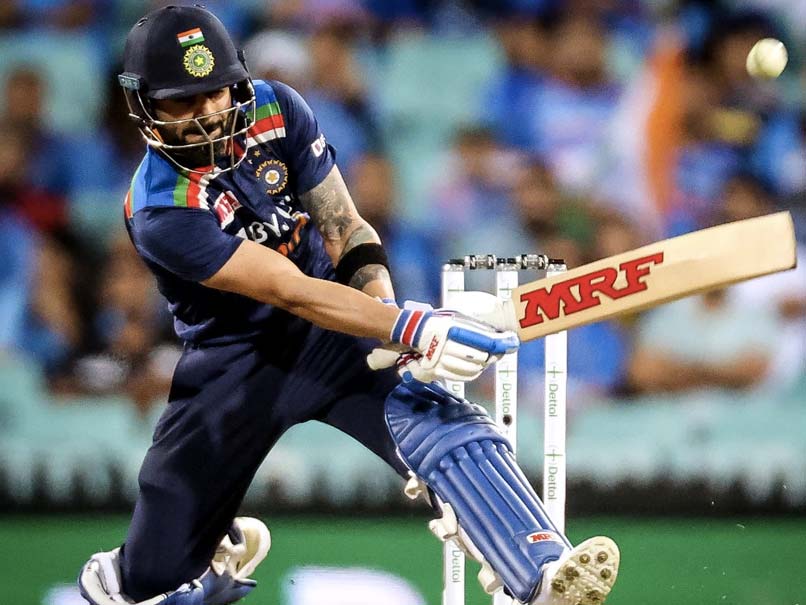 Virat Kohli went across his off-stump, going down on one knee, helping the ball clear the ropes.© AFP

Team India skipper Virat Kohli and former South Africa cricketer AB de Villiers share a close friendship. The duo have been representing Royal Challengers Bangalore (RCB) in the Indian Premier League (IPL) for a significant period of time, playing a key role in determining the franchise's fortunes. While Kohli has usually opted to stick to his strengths when it comes to playing a shot, De Villiers is extremely creative in his approach. However, the South African's innovative gameplay certainly seems to have influenced the Team India skipper's shot selection to a certain extent, as evident from one of his shots in the second T20I between Australia and India in Sydney.

Kohli grabbed the limelight with his stroke in the 15th over of the second innings bowled by Andrew Tye, with the visitors chasing a target of 195 runs. The 32-year-old went across his off-stump, going down on one knee following a full delivery, helping the ball clear the ropes.

Team India eventually chased down the target by a margin of six wickets, with two balls to spare. Hardik Pandya was named as the Man of the Match, following his unbeaten 22-ball 42 which comprised of three boundaries and two sixes. Shikhar Dhawan was the highest run-scorer, scoring 52 runs off 36 balls with four fours and two maximums. Kohli was dismissed for 40 runs off 24 deliveries.

Earlier, Australia posted a total of 194 runs for the loss of five wickets, following a 32-ball 58 by opener Matthew Wade.

AB de Villiers has announced his retirement from international cricket, though he continues to feature in T20 leagues.

Shikhar Dhawan Cricket
Get the latest updates on SA vs IND 2021-22, check out the Schedule and Live Score . Like us on Facebook or follow us on Twitter for more sports updates. You can also download the NDTV Cricket app for Android or iOS.