Virat Kohli was the captain of Mitchell Starc in Royal Challengers Bangalore (RCB). 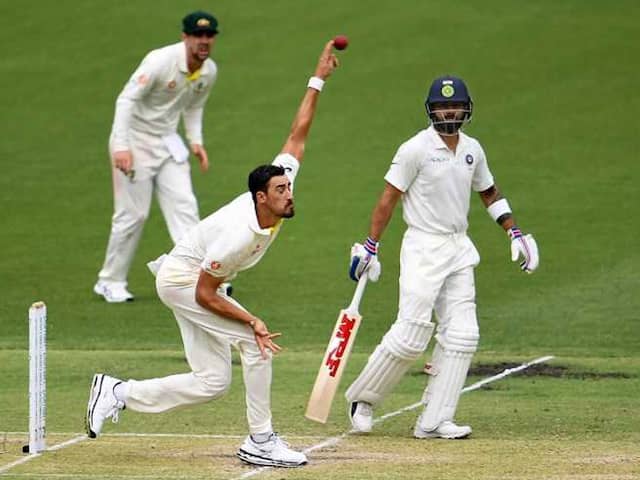 The ongoing Test series between India and Australia is currently level at 1-1.© AFP

Virat Kohli's verbal spat with rival skipper Tim Paine during the Perth Test between India and Australia did the rounds on the internet. It also drew mixed reactions from the cricketing fraternity. Australian pacer Mitchell Starc, who played under the leadership of Virat Kohli in the Indian Premier League (IPL), on Monday labelled the 30-year-old as a 'fantastic' captain. "I've played a couple of IPLs with Virat and he's been fantastic to play under, as a captain," Starc was quoted as saying by cricket.com.au.

"Obviously, he's a fantastic player. The way India play this series and go about their cricket, it's up to them," he added.

Earlier, Team India head coach Ravi Shastri defended Kohli's antics in the Perth Test. "What's wrong with his behaviour? As far as we are concerned, he is an absolute gentleman," Shastri had said.

Former Australian skipper Mitchell Johnson, on the other hand, slammed Kohli for his behavior terming it disrespectful and silly. "At the end of the match, you should be able to look each other in the eyes, shake hands and say 'great contest'," Johnson wrote in a column for Fox Sports.

"Virat Kohli could not do that with Tim Paine, shaking the Australian captain's hand but barely making eye contact with him. To me, that is disrespectful.

"Kohli gets away with more than most cricketers simply because he is Virat Kohli and he gets placed on a pedestal but this Test left the Indian captain looking silly," he added.

The ongoing Test series between India and Australia is currently level at 1-1.

The third match of the Test series will be played in Melbourne from December 26.

Mitchell Starc Ravi Shastri Mitchell Johnson Australia vs India 2018/19 Cricket
Get the latest Cricket news, check out the India cricket schedule, Cricket live score . Like us on Facebook or follow us on Twitter for more sports updates. You can also download the NDTV Cricket app for Android or iOS.