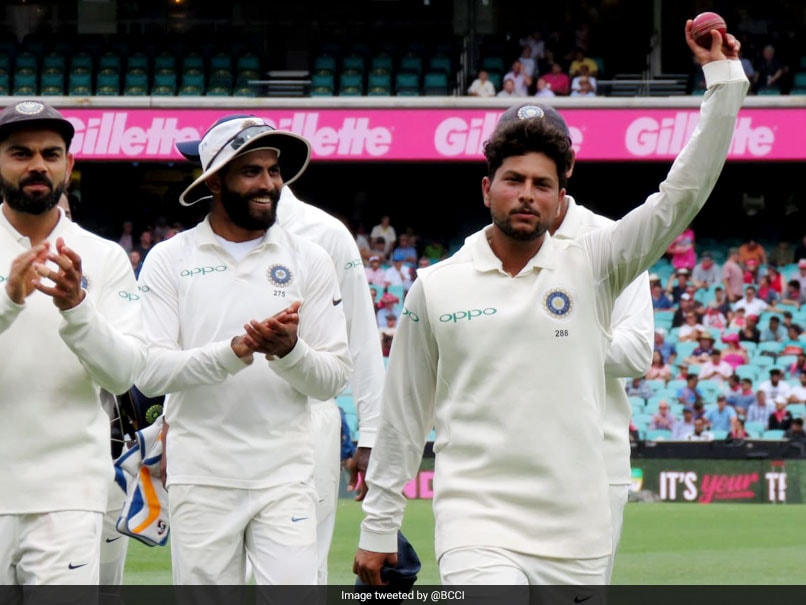 Kuldeep Yadav claimed figures of 5-99 in the first innings of the Sydney Test.© AFP

Kuldeep Yadav produced his second five-wicket haul in Test cricket as India tightened their grip in the ongoing fourth and final Test against Australia in Sydney on Sunday. Kuldeep claimed figures of 5-99 as India bundled out the hosts for 300 in the first innings. Playing his first match of the Test series, the left-arm spinner led the Indian attack from the front to produce his maiden five-wicket haul outside India. Kuldeep took wicket of Usman Khawaja (27), Travis Head (20), Tim Paine (5), Nathan Lyon (0) and Josh Hazlewood (21) to complete his five-for in the first innings.

On Day 3 of the Sydney Test, Kuldeep picked up three wickets, breaking apart the Australian top order. In the second session on Day 4, the 24-year-old cleaned up the lower order leaving Australia 322 runs short in the first innings.

This was Kuldeep's second five wicket haul in the longest format after he clinched his first against the Windies (5-57) last year in Rajkot.

Riding on the scintillating effort from Kuldeep, the Indian team also enforced the follow-on on the home team becoming the first team in last 30 years to do so against Australia Down Under.

Ravindra Jadeja provided able support to Kuldeep from the other end picking up two wickets. Pacer Mohammed Shami also grabbed a couple of wickets while Jasprit Bumrah managed a wicket as well in the first innings.

The fourth day of the Test started almost four hours late due to rain, with the home team resuming on 236 for six in reply to India's thumping first innings 622 for seven declared.

They didn't last long with all-rounder Pat Cummins trudging back to the pavilion after just three balls, clean bowled by Mohammed Shami without adding to his overnight 25.

The recalled Peter Handscomb began with purpose, confidently stroking two boundaries to move to 37 before swiping at a Bumrah delivery and dragging it onto his stumps.

That brought Nathan Lyon to the crease but he was gone after five balls, out lbw without scoring to a full toss from Kuldeep.

Tailenders Josh Hazlewood and Mitchell Starc put on 42 for the last wicket before Hazlewood fell for 21 to Yadav.

India currently lead the four Test series 2-1 and only need a draw to clinch a first-ever series win Australia.

Sydney Cricket Ground (SCG), Sydney Australia vs India 2018/19 Cricket Australia vs India, 4th Test
Get the latest updates on SA vs IND 2021-22, check out the Schedule and Live Score . Like us on Facebook or follow us on Twitter for more sports updates. You can also download the NDTV Cricket app for Android or iOS.