Highlights India vs Australia: Australia were six without loss, trailing India by 316 runs, at stumps on Day 4. 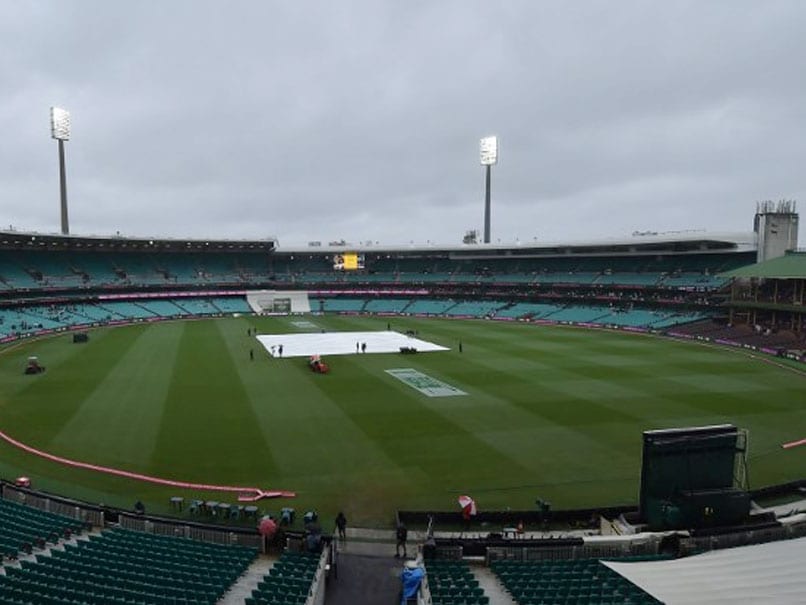 The bad light and poor weather condition forced early stumps on Day 4 at the Sydney Cricket Ground. Usman Khawaja (4*) and Marcus Harris (2*) were at the crease as Australia concluded the day at six without loss, trailing India by 316 runs, after being bowled out for 300. Earlier, the morning session was washed out due to persistent drizzle and bad light. Without a single ball bowled in the session that was scheduled to start 30 minutes before the regular time, India were in command since the beginning. The visitors are 2-1 up in the four-match series and eyeing a first-ever Test series win Down Under. Spinner Kuldeep Yadav claimed a five-wicket haul, his second in Test cricket, as India wrapped up Australia for 300, with a lead of 322 runs. Ravindra Jadeja and Mohammed Shami took two wickets each, while Jasprit Bumrah dismissed Peter Handscomb (37) to join the party. Aggressive rookie opener Marcus Harris blazed a career-best 79 to lead Australia's fight on Day 3. However, prominent batsmen Usman Khawaja, Shaun Marsh and Tim Paine failed to deliver yet again under pressure situation. As stumps on Saturday, Australia were 236/6 in 83.3 overs as the umpires took the players off the field due to deteriorating lighting condition. To cover the 16.3 overs lost on the third day, the play is scheduled to start 30 minutes before the regular time in the last two days. (SCORECARD)

11:58 IST: That brings an end to the fourth day's play in Sydney. Thank you for joining us for the live action.

UPDATE: Play on day four has been abandoned. Day five will begin at 10am AEDT with entry via a gold coin donation to the @McGrathFdn #AUSvIND https://t.co/CaiEbSjKbT

11:53 IST: Play on day four has been abandoned due to poor weather condition in Sydney. The Day 5 will start at 4:30 IST, 30 minutes before the regular start time.

11:30 IST: Last time Australia had to follow-on at their home was back in 1988 in a Test match against England at the same venue. Outside Australia, England made them follow-on one time at Trent Bridge in 2005.

10:43 IST: The umpires will inspect the playing condition after 15 minutes. We may not get to see the cricket action for next half an hour, I assume.

10:40 IST: The tea-break has concluded on the fourth day in Sydney. But the play has been stopped dur to bad light.

Tea has been called due to bad light. The third session is scheduled to commence at 16:03 if the light situation improves #TeamIndia #AUSvsIND pic.twitter.com/E4c3SA7dVe

10:14 IST: And that's Tea on Day 4! Virat Kohli is having a chat with umpire regarding deteriorating lighting condition at the SCG. Usman Khawaja (4*) and Marcus Harris (2*) are at the crease as Australia end the second session at six without loss.

10:12 IST: Australia are following on for the first time since 2005. It means they never followed on under the captaincy of Michael Clarke and Steve Smith.

10:06 IST: Injury update! Hanuma Vihari has suffered a shoulder injury and being assessed by the doctor. According to the BCCI, he will be back on the field within an hour.

10:05 IST: Jasprit Bumrah starts with a maiden over. Australia are four without loss, trailing India by 318 runs.

09:59 IST: FOUR! Usman Khawaja concludes the first over with a boundary.

Harris and Khawaja make their way back out to the middle for the second innings... #AUSvIND pic.twitter.com/24jSSHI6XP

09:55 IST: Players are back in the middle. No one wants to waste a single moment now. Usman Khawaja and Chris Harris start the proceedings for Australia. Mohammed Shami to bowl the first over.

09:49 IST: India enforce the follow-on as they are 322 runs ahead of Australia in the fourth Test at SCG.

09:45 IST: Australia all out for 300. Kuldeep Yadav claims a five-wicket haul. It's his second in the Test cricket. India still lead the Test match by 322 runs. Let's see if Virat Kohli enforces a follow-on. There are still 35 overs left in the day's play.

09:37 IST: Mohammed Shami is back into the attack.

09:35 IST: 2 runs! What a shot! Jos Hazlewood has hit it clean over the head of the bowler. It deserved to be a boundary but fell short of power near the boundary rope at mid-on.

09:32 IST: FOUR! Josh Hazlewood hits it over the man at mid-on to get himself a boundary.

09:30 IST: Australia need 130 more runs to avoid the follow-on in Sydney. They have one more day to save the Test match.

09:22 IST: The drinks are on the field now. Resuming the day from the overnight score of 236/6, Australia faltered in the beginning of the fourth day's play. Mohammed Shami, Jasprit Bumrah and Kuldeep Yadav took the crucial scalps for India.

09:19 IST: FOUR! Josh Hazlewood delights with a sweep and gets some quick runs for his team.

09:17 IST: FOUR! Shot. Mitchell Starc finds the gap at cover and gets a boundary to keep Australia alive.

09:11 IST: Change of ends for Kuldeep Yadav. He still has his eyes on a five-for.

09:03 IST: A five-for to Kuldeep Yadav? No! Hanuma Vihari drops an easy catch and denies Kuldeep Yadav a five-wicket haul for now. Josh Hazlewood gets a lifeline on 1.

09:00 IST: FOUR! MItchell Starc continues to fight for Australia, smashes a lovely cover drive to get a boundary. Australia are 264 for nine, trailing India by 358 runs.

08:54 IST: WICKET! Kuldeep Yadav traps Nathan Lyon LBW for zero. This is Kuldeep's fourth wicket in the Test. Can he claim a five-wicket haul?

08:48 IST: WICKET! Jasprit Bumrah strikes to get his first wicket of the fourth Test. And his celebration shows how happy he is. Peter Handcomb departs after scoring 37 runs off 111 deliveries.

08:45 IST: FOUR! Peter Handscomb is playing the spinners really well. It was an imposing shot and gets a boundary at mid-on.

08:43 IST: FOUR! Quick runs for Peter Handscomb. It keeps Australia fighting on a flat wicket. 250 up for Australia! They now trail India by 370 runs.

08:24 IST: WICKET! BOWLED HIM! Mohammed Shami draws the first blood on Day 4. Pat Cummins departs from 25 runs. India have got an early breakthrough. They would look to wrap up the hosts early with clouds looming over the SCG.

08:20 IST: We are ready for some action after a long delay. The players are out in the middle. Peter Handscomb and Pat Cummins will start Australia's big trail. Ravindra Jadeja to complete his over.

08:00 IST: UPDATE! The rain has been stopped and covers are coming off at the SCG. The play will start at 8:20 IST if the light allows and there's no rain.

07:45 IST: The Lunch-break is over but it's still drizzling in Sydney.

07:00 IST: And it's Lunch on Day 4! The morning session has been washed out without a ball being bowled due to constant rain in Sydney.

06:15 IST: The rain gets heavier in Sydney. We might see an early lunch soon without a single ball having bowled in the morning session on Day 4.

05:42 IST: The big covers are on now. The wait continues in Sydney.

05:31 IST: We have missed the scheduled start time once again. And the rain turns heavier now.

05:27 IST: Further stretch of the delay. The rain is back and so are covers. Umpire Ian Gould is having a chat with the groundstaff that is working hard at the moment.

If no further rain, play will resume at 11am AEDT #AUSvIND https://t.co/Y1g0wLMoaN

05:11 IST: The umpires are out in the middle for inspection. It has turned brighter as well. We may get to see some action very soon.

05:08 IST: UPDATE! The rain has stopped in Sydney and the covers are coming off.

04:45 IST: It's now raining in Sydney! Further delay as the covers are back on. Meanwhile, the Indian cricket team is enjoying their free time together in the dressing room.

04:40 IST: Cheteshwar Pujara, the man who scored notable 193 in the first innings of the Sydney Test, was seen preparing for another stellar show in second innings.

Just can't get enough of his bat, can he? @cheteshwar1 #TeamIndia #AUSvIND pic.twitter.com/UyfsEJU8aQ

Bad light has delayed the start of play on day four at the SCG #AUSvIND pic.twitter.com/MhFHdcWbmd

04:30 IST: The start of the play has been delayed due to bad light. The dark clouds are looming over the Sydney Cricket Ground and the covers are coming on.

04:20 IST: Hello and welcome to our live coverage of the fourth day of the fourth and final Test of the 2018 Border-Gavaskar Trophy between India and Australia in Sydney.

India took a stranglehold on the match over the opening two days, compiling a massive 622 for seven declared on the back of centuries from irrepressible Cheteshwar Pujara and livewire Rishabh Pant. They lead 2-1 after victories in Adelaide and Melbourne and are fast closing in on a historic first-ever series win since they first toured Australia in 1947-48. Skipper Virat Kohli's declaration left Khawaja and Harris to face 10 nervous overs before stumps on Friday, when they crawled to 24 without loss. Khawaja was dropped by Pant behind the stumps on nought but failed to make the most of his second life. On a day when the Sydney Cricket Ground was a sea of pink to mark a breast cancer awareness initiative, he was dismissed for 27 after mistiming a shot off wrist-spinner Yadav with Pujara taking an easy catch.

At the other end the diminutive Harris, who has shown flashes of brilliance in his short four-Test career, quickly found a groove with some crisp shots around the ground. He survived a close call on 24 when a drive to a diving KL Rahul fell just at his fingertips and reached his second Test 50 with a single before smacking three fours in one Yadav over. Harris went to lunch on 77 but added just two more before chopping a Jadeja delivery onto his stumps, blowing a glorious chance to press on and make Australia's first century of the series.

Australia Cricket Team Australia vs India 2018/19 Live Score Live Cricket Score Live Blogs Australia vs India, 4th Test Cricket
Get the latest updates on SA vs IND 2021-22, check out the Schedule and Live Score . Like us on Facebook or follow us on Twitter for more sports updates. You can also download the NDTV Cricket app for Android or iOS.