Australia were 236 for six, still 386 behind, when the rain forced early stumps on Day 3. 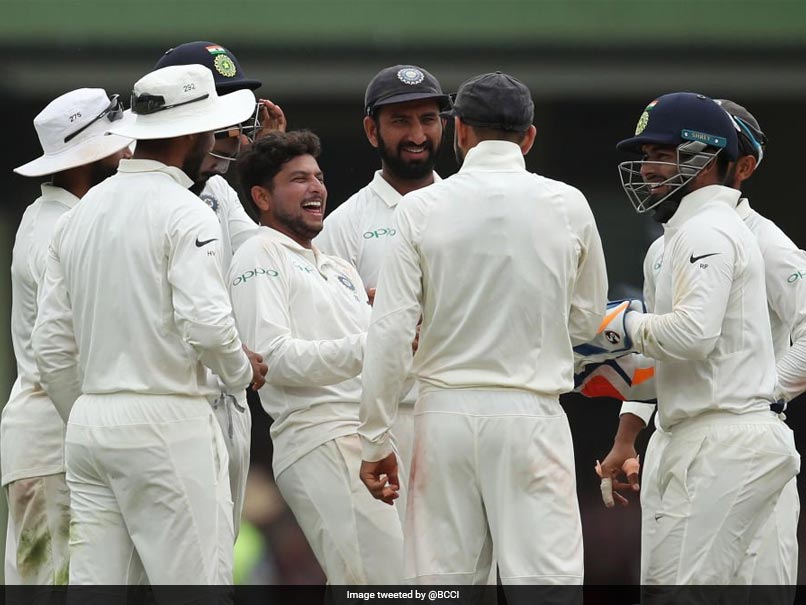 Spinners Kuldeep Yadav and Ravindra Jadeja put India back in command after a decent start by Australia on the third day of the fourth Test at the Sydney Cricket Ground (SCG) on Saturday. However, bad light and unpleasant weather gave the home team some relief. Australia were 236/6 in 83.3 overs, trailing India by 386 runs, when the umpires took the players off the field due to deteriorating lighting condition. Peter Handscomb and Pat Cummins held the fort for Australia, who have four wickets in hand and two more days to save the Test match.

Australia went to lunch at 122 for one but meekly surrendered soon afterwards, losing three wickets for 24 runs. Kuldeep Yadav ended with 3/71 and Ravindra Jadeja 2/62.

India took a stranglehold on the match over the opening two days, compiling a massive 622 for seven declared on the back of centuries from irrepressible Cheteshwar Pujara and livewire Rishabh Pant.

They lead 2-1 after victories in Adelaide and Melbourne and are fast closing in on a historic first-ever series win since they first toured Australia in 1947-48.

Skipper Virat Kohli's declaration left Khawaja and Harris to face 10 nervous overs before stumps on Friday, when they crawled to 24 without loss.

Khawaja was dropped by Pant behind the stumps on nought but failed to make the most of his second life.

On a day when the Sydney Cricket Ground was a sea of pink to mark a breast cancer awareness initiative, he was dismissed for 27 after mistiming a shot off wrist-spinner Yadav with Pujara taking an easy catch.

At the other end the diminutive Harris, who has shown flashes of brilliance in his short four-Test career, quickly found a groove with some crisp shots around the ground.

He survived a close call on 24 when a drive to a diving KL Rahul fell just at his fingertips and reached his second Test 50 with a single before smacking three fours in one Yadav over.

Harris went to lunch on 77 but added just two more before chopping a Jadeja delivery onto his stumps, blowing a glorious chance to press on and make Australia's first century of the series.

So far, none of Australia's batsmen has reached three figures over the four Tests, with Harris' 79 the highest anyone has scored. In contrast, India have had a field day, compiling five centuries.

Australia gambled by picking inexperienced allrounder Marnus Labuschagne to come in at number three and he settled in well, cracking seven boundaries in a stylish 38.

But he was sent packing by a blinding reflex catch from Ajinkya Rahane at mid-wicket off Mohammed Shami's bowling.

Marsh scored a century in Sydney against England this time last year, but was out for eight, tickling an edge to Rahane at slip from a turning ball off Jadeja.

The day got worse when Travis Head was caught and bowled by Yadav just before tea for 20 and as storm clouds gathered overhead Yadav clean bowled Paine for five in the first over after they came back.

It was left to Handscomb, recalled as a specialist in tackling spin, and paceman Cummins, who made a gutsy 63 in the third Melbourne Test, to try and repair the damage.

Sydney Cricket Ground (SCG), Sydney Cricket Australia vs India, 4th Test
Get the latest updates on India vs South Africa and check out  Schedule, Results and Live Score. Like us on Facebook or follow us on Twitter for more sports updates. You can also download the NDTV Cricket app for Android or iOS.