India posted their second medal on the tennis court through Rohan Bopanna and Divij Sharan. 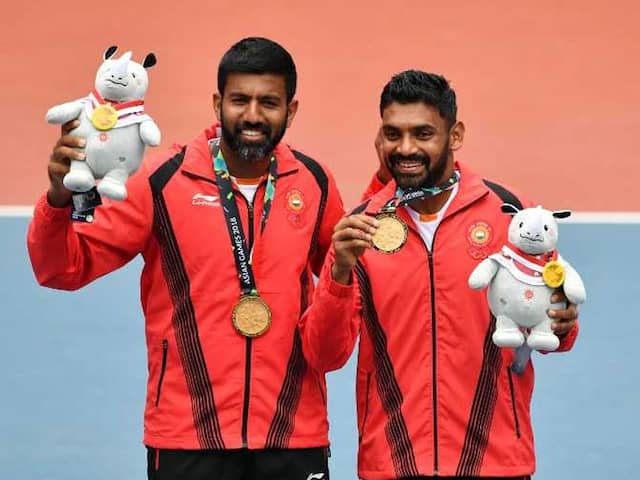 The Indian men's tennis pair of Rohan Bopanna-Divij Sharan outclassed Kazakhstan's Aleksandar Bublik and Denis Yevseyv 6-3, 6-4 in the men's doubles final to bag a gold medal in a match that lasted 52 minutes. Bopanna and Sharan added the sixth gold medal to the Indian contingent's medal tally. India, now have a total of 22 medals in their kitty -- consisting 6 gold, 4 silver and 12 bronze. Earlier in the semi-final, Rohan Bopanna and Sharan won 4-6, 6-3, 10-8 against Japan's Kaito Uesugi and Sho Shimabukoro in a three-set thriller which lasted for 72 minutes.

In the quarterfinals, which also went to three sets, Bopanna and Sharan edged past Chinese Taipei's Yang Tsung-Hua and Hsieh Chengpeng 6-3, 5-7, 10-1 in 76 minutes.

The pair of Rohan Bopanna-Divij Sharan displayed their superiority in the Round of 16 as they overcame Thailand's Wishaya Trongcharoenchaikul and Nuttanon Kadchapanan 6-3, 6-1 in straight games. The match had lasted for 54 minutes.

In the Round of 32, Bopanna and Sharan had eased past Indonesia's Susanto Da and Susanto Ia defeating the 6-3, 6-3 in straight games in a match that lasted for 54 minutes.

Comments
Topics mentioned in this article
Asian Games 2018 Tennis
Get the latest Cricket news, check out the India cricket schedule, Cricket live score . Like us on Facebook or follow us on Twitter for more sports updates. You can also download the NDTV Cricket app for Android or iOS.