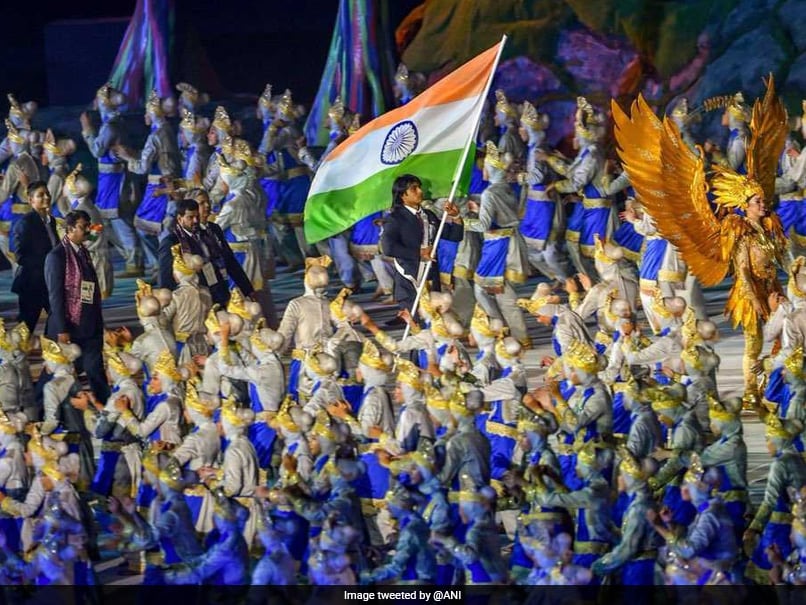 The Asian Games was declared open by Indonesia's President Joko Widodo late on Saturday during a colourful opening ceremony in Jakarta dominated by the joint march of North and South Korea. A burst of fireworks followed the announcement, marking the start of the two-week tournament to be held in Jakarta and Palembang in Sumatra. The ceremony stage -- with features of 120-metre length, 30-metre width and 26-metre height -- showcased a towering mountain as its background, accompanied by plants and flowers unique to Indonesia. Commonwealth Games gold medallist Neeraj Chopra was India's flag-bearer in the opening ceremony. The Indian sports ministry had cleared an 804-member Indian contingent, including 572 athletes, for the Asian Games. The sporting extravaganza will see around 10,000 athletes from 45 countries compete in 58 games.

19:53 IST: Thank you for staying with us for the live updates. Please join us again tomorrow for the live blog updates from the first day of the 2018 Asian Games.

19:50 IST:And we are now to the final performance of the night.

Asian Games in Indonesia begin tonight. Good wishes to all 572 members of the Indian contingent in 36 disciplines. May you do well over the next 15 days. Bring back laurels and glory for yourselves, and the country

As the @asiangames2018 begin, ALL THE BEST to our contingent in Jakarta. Gold and glory await you, champs. Make us all proud! #AsianGames2018

19:32 IST:India's Prime Minister extended his greetings to the Indian athletes.

Best wishes to the Indian contingent for the @asiangames2018, which are being held in Indonesia. We are extremely proud of our athletes and I am sure they will give their best through the games. #AsianGames2018

19:14 IST:Cultural performances on display at the moment.

19:00 IST:The ceremony show begins after the Protocol segment got over.

18:33 IST:Indonesian's national anthem being played after the flag hoisting ceremony.

18:30 IST:Indonesian singer Via Vallen is crooning to her hit singles. Via performed on the song - Meraih Bintang, the official theme song of the Asian Games 2018.

18:22 IST:And the last country are the host nation Indonesia. A rousing reception for their team from the spectators.

18:21 IST:Vietnam and Yemen are the next countries.

18:20 IST:Tajikistan, Thailand, Timor Leste and United Arab Emirates are the next three to march into the stadium.

18:15 IST:Singapore, Sri Lanka, Syria, Chinese Taipei are the next to march out.

18:11 IST:Qatar, the former host nation, are marching in the stadium.

18:10 IST:Nepal, Oman and Pakistan are out in the middle now.

18:06 IST:Malaysia, Myanmar and Mongolia make way to the stadium. Mongolia are the nation to watch out for in the wresting and weightlifting events.

18:05 IST:Laos, Macau and China receive loud cheers from the crowd.

18:02 IST: Kyrgystan are the next nation to make their way to the stadium.

18:01 IST: HISTORIC! This is a special moment. Korea unified at the Asian Games. They will compete as separate nations in different sports though.

One by one, athletes walk the stage. This is truly becoming the melting pot for countries all over Asia to celebrate the love of game and friendship! Has your country graced the stage yet? Retweet if they have! #OpeningAG2018 #AsianGames2018

18:00 IST:Jordan, Kazakhstan are led by their respective flag bearers followed by Korea.

17:58 IST:Iran and Japan are the next two teams to follow.

17:55 IST:After Hong Kong China and China,it is India's turn to make their way into the stadium. India is led by their flag-bearer and CWG 2018 gold medal winner Neerak Chopra.

17:49 IST:Afghanistan is the 1st of the 49 nations to begin their march. Bahrain;s participants follow next. Bangladesh are the third country.

17:48 IST:Athletes now begin their march amid loud and thunderous cheers from the crowd.

17:45 IST:The visuals from the stadium are simply breathtaking. A visual treat for everyone. Children are performing in unison leaving everyone stunned. A showcase of talent and a brief insight on what's in store for the next fortnight.

17:40 IST: Indonesia President Joko Widodo makes way to the stage in style. He reached the stage on a motorcycle leaving the spectators in awe.

President of Indonesia, @jokowi arrives at the #AsianGames2018 Opening Ceremony in the most spectacular way! Watch the show at https://t.co/qVN2hgr1b3

March to victory!
Indian contingent produced a stellar show at the 2018 CWG, where @Pvsindhu1 was the flag-bearer. Now it's time for @Neeraj_chopra1 to take on the guard for the opening ceremony of the 18th #AsianGames2018 at Gelora Bung Karno Main Stadium! #IndiaontheRise pic.twitter.com/usg22fCCDN

17:28 IST:The 2018 Asian games will see 45 countries participating. It includes 43 other nations, hosts Indonesia and a unified Korea (North and South).

This is what you've been waiting for, the #AsianGames2018 Opening Ceremony! An abundance of Indonesian cultures will be showcased through dance, songs, drama, and stage decoration. Watch the show now on national TV or https://t.co/id8kKmxV3c #OpeningAG2018 pic.twitter.com/F3Y386CuPP

North and South Korea had marched together at the 2018 Commonwealth Games too.

17:24 IST:We are moments away from the opening ceremony now.

17:00 IST:Indonesian culture will be at full display today at the opening ceremony.

This is what you've been waiting for, the #AsianGames2018 Opening Ceremony! An abundance of Indonesian cultures will be showcased through dance, songs, drama, and stage decoration. Watch the show now on national TV or https://t.co/uTj8RGbIJP #OpeningAG2018 pic.twitter.com/eQGVmZDWdw

16:41 IST:India's batting legend Sachin Tendulkar has urged everyone to come out abd support the Indian team.

The #AsianGames2018 are here. The best way we can support our athletes representing India is to watch them do what they do best. Let's show them our true mettle and with pride bring home some metal, guys!

16:35 IST: Hello and welcome to the live updates of the 2018 Asian Games opening ceremony.

The stage has been built manually by artists from Bandung and Jakarta and will witness around 4,000 dancers who will perform on dance choreographed by Denny Malik and Eko Supriyanto. The dancers are expected to perform "an energetic and elegant show" with the presence of an orchestra that will feature at least a hundred musicians with its two conductors Addie MS and Ronald Steven, who are well recognised amid Indonesian music culture. The main Gelora Bung Karno stadium will be transformed into a verdant mountain, organisers say, and Indonesian celebrity singer Anggun Cipta Sasmi will take to the stage.

Around 50,000 people are expected inside the stadium, Games organising committee INASGOC said Saturday, adding that tickets -- which range in price from to $50-$350 -- had sold out. Indonesian Gunawan Tri Wasisto, who works in finance, said tickets were costly but worth it.

Comments
Topics mentioned in this article
Asian Games 2018 Other Sports
Get the latest updates on ICC T20 Worldcup 2022 and CWG 2022 check out the Schedule, Live Score and Medals Tally. Like us on Facebook or follow us on Twitter for more sports updates. You can also download the NDTV Cricket app for Android or iOS.