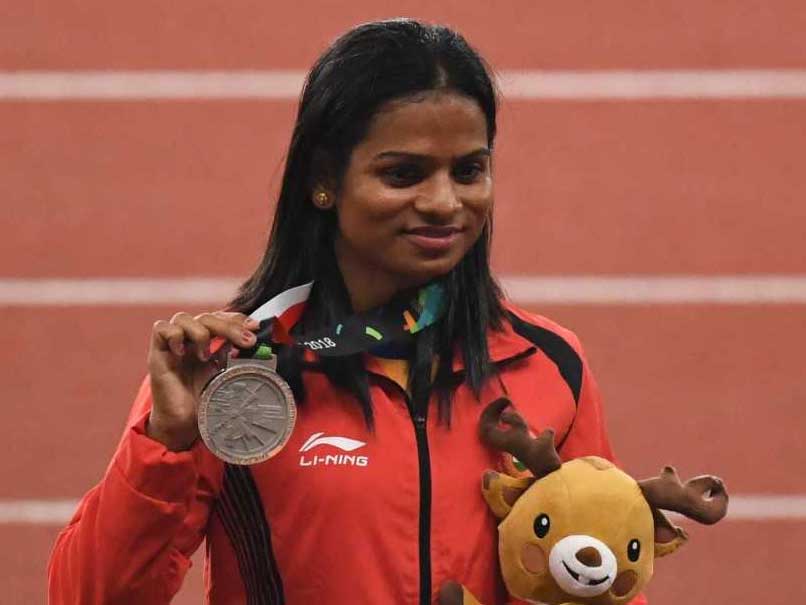 India's Dutee Chand clinched her second silver medal at the 18th Asian Games after finishing runners-up in the women's 200 metres race on Wednesday. Dutee, who also won the silver medal in the 100m, clocked 23.20 seconds to finish behind Bahrain's Edidiong Odiong, who claimed the gold medal in 22.96 seconds. Wei Yongli of China won the bronze medal with a timing of 23.27 seconds at the Gelora Bung Karno Sports Stadium. Odisha athlete Dutee had topped the standings in the semi-finals with a timing of 23.00 seconds -- her personal best, while Odiong was second in 23.01 seconds on Tuesday. In the final, the 22-year-old Dutee was 0.20 seconds slower than her Tuesday's performance. Running in the third lane, Dutee started strong and in the first 3040 metres, she was in the third position.

But she peaked and gave a tough fight to 21-year-old Odiong, who seemed the favourite from the start. After the 7-metre mark, it was nearly obvious that the top two positions would be taken by Odiong and Dutee respectively. Odiong, with a long stride, never looked beatable by Dutee. The latter then just had to hold off Yongli, who was pushing to the limit. Asian Championships bronze medallist Olga Safronova, who had finished a spot ahead of Dutee in the Bhubaneswar meet in 2017, claimed the fourth spot. The Kazakh sprinter finished with a timing of 23.32.

Comments
Topics mentioned in this article
Asian Games 2018 Other Sports
Get the latest updates on Fifa Worldcup 2022 and check out  Fifa World Cup Schedule, Stats and Live Cricket Score. Like us on Facebook or follow us on Twitter for more sports updates. You can also download the NDTV Cricket app for Android or iOS.