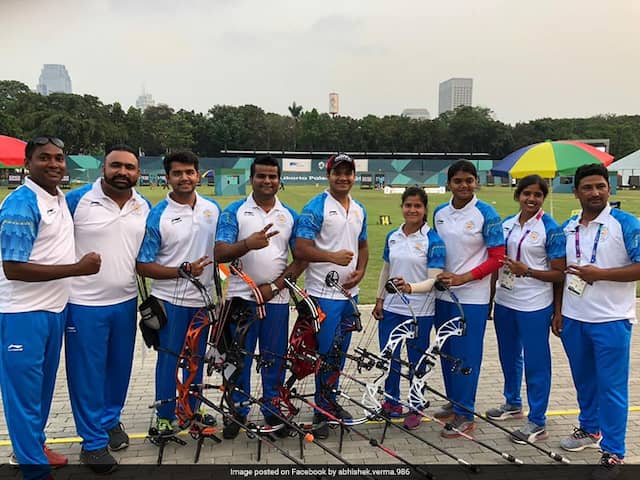 Both the Indian teams would be happy with their performances.© Facebook

The Indian men's compound archery team was unlucky to lose out to South Korea in the men's compound archery event of the 2018 Asian Games when they went down in the shoot-off after the sides were tied at 229-229 after End 4. The Indian team of Abhishek Verma, Rajat Chauhan and Aman Saini started well and were in the lead in the initial stages of the match before a couple of indifferent shots allowed the South Koreans to come back into the match and eventually draw level.

It was a heartbreak of massive proportions for the Indian contingent as they were found wanting in the shoot-off and ended second best.

The Indian women's compound archery team also finished behind the formidable South Koreans in the final.

The team of Muskan Kirar, Madhumita Kumari and Jyothi Surekha Vennam ended up with a silver medal after going down 228-231.

The women's team was also ahead of the South Koreans in the initial stages but the latter, who are the top-ranked team in the world, never lost their poise and went on to win the gold.

However, both the Indian teams would be happy with their performances, as they did not at any stage look outclassed by their rivals and a couple of shots in either direction, could have changed the colour of the medal.

Comments
Topics mentioned in this article
Asian Games 2018 Archery Other Sports
Get the latest Cricket news, check out the India cricket schedule, Cricket live score . Like us on Facebook or follow us on Twitter for more sports updates. You can also download the NDTV Cricket app for Android or iOS.