Live updates of Asian Games 2018: India won one gold and one silver in men's 800m category. 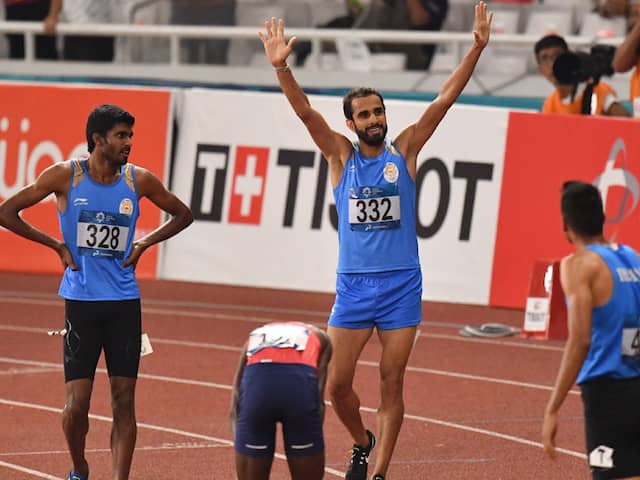 Manjit Singh won the gold in the men's 800 metres event while Jinson Johnson clinched the silver medal in men's 800 metres on Tuesday. With these two medals, India's medal tally now stands at 49 with 9 gold, 18 silver and 22 bronze. Manjit Singh finished the race in 1:46.15 minutes while second-placed Jinson Johnson clocked 1:46.35 minutes. Qatar's Abdalla Abubaker came third with a time of 1:46.38 minutes. Manjit was trailing early on but he sprinted real fast in the final stages to win the race. Johnson also kept pace throughout the race and eventually finished second. India also added to their medal tally after bagging two medals in Kurash, a form of wrestling indigenous to central Asia, with Pincky Balhara and Malaprabha Yallappa Jadhav winning silver and bronze respectively in the women's 52kg category. 19-year-old Pincky lost 0-10 to favourite Gulnor Sulaymanova of Uzbekistan in the gold medal clash to settle for the silver. (MEDAL TALLY)

17:55 IST: India's Pincky Balhara is through to the final. She defeated Uzbekistan's Oysuluv Abdumajidova 3-0 in the Women 52 kg semi-finals

10:47 IST: HEPTATHLON: Swapna and Purnima will be in action in Shot Put in some time.

10:45 IST: HEPTATHLON: Swapna Barman ends up with 1003 points in high jump. She finishes on top in the event. Purnima Hembram, the other Indian in the fray, finishes 5th with 891 points.

10:30 IST: HEPTATHLON: India's Swapna Barman fails in all her three attempts in 1.85 in High Jump. She is still on top of the chart.

10:10 IST: HEPTATHLON: India's Swapna Barman is on top of the chart after a successful 1.82 attempt in High Jump.

09:53 IST: SQUASH: India beat Thailand 3-0 in their women's team pool match. They will play Indonesia later in the day.

08:10 IST: CYCLING: India's Deborah finishes fourth Heat 1 of Round 1 of Women's Keirin. She was 1.798 seconds behind the leader, Wai Sze Lee of Hong Kong. The Indian has moved to the repechage round.

In Archery, both the men and the women compound teams will fight for the gold medal. In both events, India will be up against Republic of Korea.

There are two boxing matches scheduled on Tuesday with Sonia Lather take on DPR Korea's Jo Son Hwa in the quarterfinals of Women's Feather 57kg category. Pavitra will be up against Indonesia's Hasanah Huswatun in the Women's Light (60 KG) Quarterfinals.

In the afternoon, the Indian men's hockey team will play their final group match against Sri Lanka. The Indian team has been phenomenal in the tournament, scoring a total of 56 goals in the four matches played so far.

In the evening, there will be four medal events in athletics. While Annu Rani will feature in the women's javelin throw final start list, Manjit Singh and Jinson Johnson will be in fray for a medal in men's 800m final.

With Suriya Loganathan and Baburao Sanjivani in the women's 5000m final start list, India will also expect a medal in the mixed 4 x 400m relay final.

Comments
Topics mentioned in this article
PV Sindhu Badminton Other Sports Asian Games 2018
Get the latest Cricket news, check out the India cricket schedule, Cricket live score . Like us on Facebook or follow us on Twitter for more sports updates. You can also download the NDTV Cricket app for Android or iOS.