Steve Smith returns to action after missing out the Headingley Test, where Ben Stokes scripted an exciting win for England. 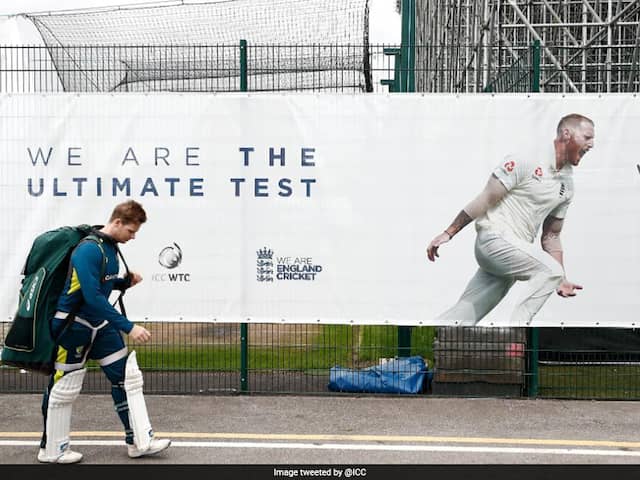 Steve Smith has returned to rescue Australia from a shock defeat to England.© Twitter

Steve Smith, the former Australia captain, has returned to the playing XI for the fourth Test, starting on Wednesday in Manchester, after missing the third match of the five-Test series due to delayed concussion. The man who scored centuries in successive innings of the first Test was hit by a Jofra Archer bouncer in the second Test at Lord's. In Steve Smith's absence, holders Australia lost the third Test and surrendered the 1-0 lead they had held, courtesy a sensational hundred by Ben Stokes in Leeds last week. Ahead of the fourth Test, the International Cricket Council (ICC) tweeted a picture of Steve Smith, in which a spirited Ben Stokes can be seen in background, to set up the battle between the two star campaigners.

"Look who's ready for the 'Ultimate Test'," the ICC captioned the picture on Twitter, which was soon flooded with fans' replies.

Look who's ready for the 'Ultimate Test' pic.twitter.com/XFfMiaTNs3

"My mind says stokesy but my heart is for steve....let both perform but Aussies should win this battle," a user replied to the ICC's tweet.

My mind says stokesy but my heart is for steve ....let both perform but Aussies should win this battle

"Aus will win with Steve smith and mitchell starc will hunt the tail enders," another one joined in.

"Both are inform in their team," said a user.

Both are inform in their team

"Looks like Stokes bowled him out & Smith is walking towards the pavilion," explained another fan.

Smith, who dethroned India captain Virat Kohli to reclaim the top spot in the ICC Test rankings on Tuesday, has returned to rescue Australia from a shock defeat to England. Australia lost the third Test by one wicket.

The Ashes 2019 is now level at 1-1 with both the teams having an equal chance to seal the trophy in England.

Ben Stokes The Ashes 2019 Cricket England vs Australia, 4th Test
Get the latest Cricket news, check out the India cricket schedule, Cricket live score . Like us on Facebook or follow us on Twitter for more sports updates. You can also download the NDTV Cricket app for Android or iOS.