The umpiring standards in the first Ashes Test have been quite poor with Joel Wilson being under the microscope on many occasions. 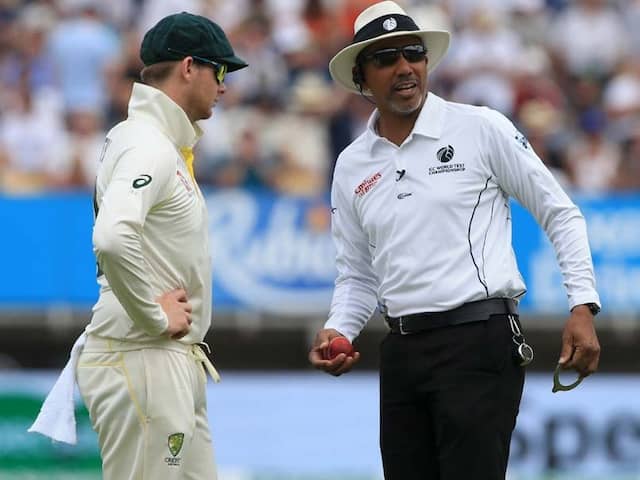 The two mistakes on Day 5 took the total number of umpiring errors in the first Ashes Test to 15.© AFP

On-field umpire Joel Wilson faced the wrath of Twitter users following two howlers on the final day of the 1st Ashes Test in Edgbaston on Monday. The two mistakes on Day 5 took the total number of umpiring errors in the first Ashes Test to 15 with Joel Wilson accounting for 10 of those. On Day 5, Joel Wilson's first error came when Joe Root was adjudged lbw in the 13th over of England's innings. However, the Englishman immediately reviewed the decision with replays showing that James Pattinson's delivery was sliding down the leg side. In the 17th over, Root was again given out lbw by Wilson off the bowling of Peter Siddle and yet again the England batsman asked for DRS and replays showed that Root got a big inside edge.

When Joel Wilson gives you OUT .. You just review it .. #Fact #Ashes

Joel Wilson when it's been a long week and he wants to go home pic.twitter.com/i0sOKf4nj4

Umpire Joel Wilson is having a shocker in the current Ashes test. Here's his Wikipedia entry as of just now pic.twitter.com/mUrHduqynY

We can only conclude Joel Wilson gave that out because he was a bit bored. Not even close #Ashes19

Joel Wilson when he has to make a decision pic.twitter.com/Oz2SRGMSI3

The standard of umpiring in this game from Joel Wilson... Jeez. #ashes2019 #ashes #umpiring pic.twitter.com/S0Ckeetjup

Seems ironic that Specsavers are sponsoring #TheAshes as Joel Wilson is a walking advert for them! 8 decision overturned on his watch now... #EngvAus #bbccricket pic.twitter.com/U0BnRtpTyF

@SussexCricketLg panel umpires, do stick with it, work hard and you can one day be an elite umpire like Joel Wilson. pic.twitter.com/cAj621IMA2

Apart from the umpiring howlers, England found themselves in a spot of bother after losing both openers -- Rory Burns (11) and Jason Roy (28). At the time of writing this, England were 60 for two in 21.2 overs, still needing 338 runs to win.

Day 4 belonged to Australia as Steve Smith's brilliance with the bat again frustrated the English.

Smith made 142 in Australia's second innings 487-7 declared on Sunday after the star batsman's 144 bailed them out to 284 following a collapse to 122-8 in their first innings.

With Matthew Wade making 110 on the fourth day as well, Australia set England an imposing target of 398.

Sunday was also memorable for Wade, once Australia's wicketkeeper but now selected as a specialist batsman.

Wade, whose hundred was his first in Ashes cricket, had the best view at a packed Edgbaston while helping Smith add 126 for the fifth wicket.

Edgbaston, Birmingham The Ashes 2019 Cricket Michael Vaughan England vs Australia, 1st Test
Get the latest Cricket news, check out the India cricket schedule, Cricket live score . Like us on Facebook or follow us on Twitter for more sports updates. You can also download the NDTV Cricket app for Android or iOS.