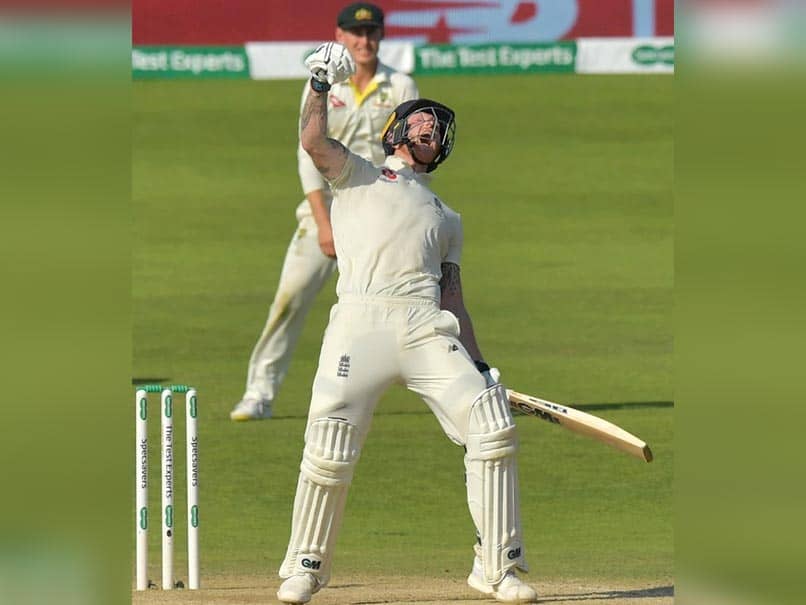 Ben Stokes finished on 135 not out as England squared the five-match series at 1-1.© AFP

Ben Stokes may well have given the team dietician nightmares after doing the same to Australia's bowlers by revealing takeaway chicken and chocolate bars had fuelled his remarkable unbeaten century that saw England to a staggering one-wicket win in the third Ashes Test at Headingley on Sunday. All-rounder Stokes was 61 not out, with England on 286-9, when he was joined out in the middle by last man Jack Leach. It was the cue for Stokes, already a national hero following his batting fireworks in England's World Cup final win over New Zealand at Lord's last month, to switch into one-day mode.

In undoubtedly one of the greatest innings ever seen in 142 years of Test history, Stokes upped the tempo in a five-and-a-half hour stay of 219 balls, including 11 fours and eight sixes, that saw him finish on 135 not out as England squared the five-match series at 1-1.

There was no hint of the fireworks to come, however, when Stokes reached Saturday's close on two not out off 50 balls.

Asked what he did overnight, the 28-year-old left-handed batsman replied: "My wife and kids came down and they got there at around 10 o'clock. My wife walked into me eating pasta in my boxer shorts!

"Last night, I think had a knock-off Nandos (fried chicken) and two (chocolate) bars of Yorkie biscuit and raisin. And a couple of coffees in the morning."

Reflecting on an innings that he reckoned was "certainly close" to surpassing his World Cup final display, Stokes said: "We knew if we lost this game then the Ashes were gone.

"When a No 11 comes out needing 70 (73 in fact) to win, I knew what I had to do in terms of the game situation," the England vice-captain added.

"The only time I started to get a little bit nervous or panicking was when we got into single figures."

"Walking off there at the end when the whole of Headingley was standing up and celebrating was a very special moment and something I had to try to take in because moments like that don't come along very often."

The first came when, with England needing two to win, non-striker Leach escaped being run out after charging down the pitch only because off-spinner Nathan Lyon fumbled a throw to the bowler's end.

"I could not believe it when I looked up," said Stokes. "Me and Leachy could have had a conversation he was that close to me.

"Obviously pressure situations in games can affect what a human does.

"Nine times out of 10 Nathan Lyon would pick that ball up and take the stumps off."

The very next ball saw Lyon rap Stokes on the pad but his plea for lbw was rejected by umpire Joel Wilson.

Given Australia had by then used up all their reviews, they had no way of overturning the West Indian official's verdict, even though the Decision Review System indicated Stokes would have been out out.

Stokes, who insisted DRS was wrong in this case, added: "It shows how crucial it is in using your reviews. When you get to a situation like that, you still need one."

Stokes said he was proud of putting in the "hard yards", which included taking 3-56 during a marathon 24.2 over spell in Australia's second innings.

"He's a bit of a freak to be able to produce match-winning performances like that," England captain Joe Root said of Stokes.

"He's the ultimate team man, will do everything for every single player -- that's why he's a brilliant vice-captain, he drags people with him.

"He stood up and that's exactly what you want from your leaders."

Ben Stokes The Ashes 2019 Cricket
Get the latest updates on India vs England Series, India vs England , live score and IPL 2021 Auction . Like us on Facebook or follow us on Twitter for more sports updates. You can also download the NDTV Cricket app for Android or iOS.