The decision was taken by the WCC panel after the overthrow call caused a massive uproar in the world media and cricket fraternity. 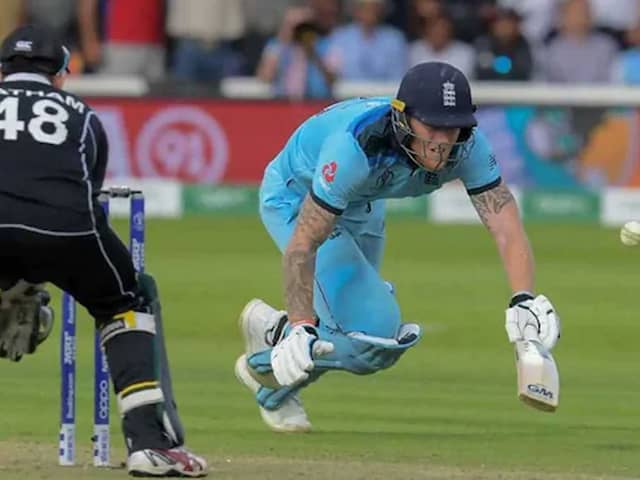 Ben Stokes apologised after the throw from Martin Guptill deflected off his bat.© AFP

The World Cup 2019 final overthrow incident involving England's Ben Stokes and New Zealand's Martin Guptill, which took the match to a Super Over, will be reviewed in September 2019, the MCC World Cricket committee (WCC) decided during a meeting on Monday. The decision was taken by the WCC panel including the likes of former cricketers Shane Warne and Kumar Sangakkara after the overthrow call caused a massive uproar in the world media and cricket fraternity. On-field umpire Kumar Dharmasena had also admitted to the error in judgement, days after the controversy broke out.

"The WCC discussed Law 19.8 in relation to overthrows, in the context of the ICC Men's Cricket World Cup Final. WCC felt that the Law was clear but the matter will be reviewed by the Laws sub-committee in September 2019," the Marylebone Cricket Club (MCC) said in a statement.

The WCC during the meet also welcomed the introduction of replacements for players suffering from concussion and ICC's recent announcement of further trials into the automated calling of No balls.

According to the MCC release, "the committee also suggested that ball-tracking software should be used to help on-field umpires judge No balls over waist height and wides over the batsman's head. Such calls often prove to be difficult for umpires but would be relatively straightforward for technology to assist with."

Among other major discussions, which took place during the meet, the WCC expressed its support in seeing the return of touring sides to Pakistan.

Martin Guptill Cricket
Get the latest updates on IPL 2020, check out the IPL Schedule for 2020 and Indian Premier League (IPL) Cricket live score . Like us on Facebook or follow us on Twitter for more sports updates. You can also download the NDTV Cricket app for Android or iOS.