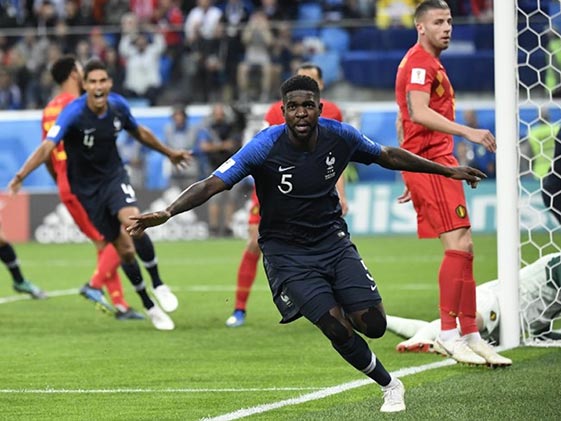 Samuel Umtiti headed France into the World Cup final in Saint Petersburg on Tuesday with a 1-0 win, consigning Belgium's 'golden generation' to another bitter disappointment. France's own supremely talented young squad will aim to make amends for defeat on home soil in the final of Euro 2016 in Sunday's showpiece against England or Croatia. In a World Cup replete with set-piece goals, a corner again proved decisive when Umtiti timed his run perfectly to meet Antoine Griezmann's delivery six minutes into the second half. France were thankful for fine saves from goalkeeper Hugo Lloris either side of half-time. Belgium's Kevin De Bruyne warned Kylian Mbappe was ready to take the world by storm on the eve of the game and the most expensive teenager in the history of football showed why inside the first 60 seconds. (HIGHLIGHTS: France vs Belgium)

01:23 IST: Courtois SAVES AGAIN,corner for France! Short one taken as the referee blows the final whistle, as it stands, France 1-0 Belgium.

01:20 IST: Courtois SAVES!Greizmann gets a shot on goal, but the Belgian keeper dives to his right to keep it away. 3 minutes added time remaining. France 1-0 Belgium.

01:15 IST: Free-kick for Belgium,Kevin de Bruyne takes it from 30-yard out, drifted in. Chadli keeps the ball inside the box but Mbappe kepts it away as the final long ball in comes close for Romelu Lukaku, who fails to get a touch. France 1-0 Belgium.

01:12 IST: Substitution for France,Olivier Giroud has been replaced by Steven Nzonzi in the 85th minute. 5 minutes regulation time left to play!

01:08 IST: Hugo Lloris SAVES!Axel Witsel gets a shot, powered and directed well on target but the Tottenham Hotspur goal keeper does well to punch it away. France 1-0 Belgium.

01:07 IST: Second substitution for Belgium,Fellaini has been replaced by Carrasco in the 80th minute. 10 minutes remaining!

01:06 IST: Griezmann takes the free-kick,Paul Pogba gets a head to it but the ball goes off target. France 1-0 Belgium, 79 minutes played,

01:05 IST: Pogba opens up space,finds Mbappe on the space as Fellaini pulls his shirt to bring him down, free-kick for France.

01:01 IST: Foul on Griezmann by Axel Witsel,inside the France half as the referee gives away a free-kick and Samuel Umtiti takes a long ball only to lose possession back to Belgium, who are forcing continuous strings of attacks. France 1-0 Belgium.

00:54 IST: Griezmann sets up Giroud,who comes in steaming, just to sky the volley on his left-foot high above the crossbar. France 1-0 Belgium.

00:52 IST: CLOSE!A cross from Mertens which is headed by Fellaini from inside the box, just goes wide off the post. 65 minutes played.

00:50 IST: Yellow Card for Eden Hazard,for stopping a French attack by fouling on Hernandez. He will have to be careful here now. France 1-0 Belgium.

00:49 IST: Chance for Belgium,Mertens straight on looking to make a difference as his header directed towards Kevin de Bruyne is kept out by Raphael Varane. 61 minutes played.

00:43 IST: Sublime football from France,Mbappe gets better off Fellaini on the right flank, but the ball goes out for goal kick. Hernandez missed a chance from a close-range just minutes earlier. France 1-0 Belgium.

00:41 IST: Free-kick for France on the edge of the box,Griezmann takes it but the ball is away by Chadli then Lukaku.

00:39 IST: GOAAAL! Samuel Umtiti beats Fellaini to win the aerial ball,puts France in the lead through a swinging ball in from Griezmann in the 51st minute. France 1-0 Belgium.

00:38 IST: Olivier Giroud twists and turns,to take a shot but Vincent Kompany keeps it out, the ball goes out for a corner.

00:35 IST: Axel Witselgets a brilliant curling ball inside the box but Romelu Lukaku skies the ball, off target. France 0-0 Belgium.

00:32 IST: Belgium -- unbeaten in their last 24 matches,gets the second-half underway.

00:16 IST: Missed chance for Belgium!Kevin de Bruyne delivers a brilliant cross as Samuel Umtiti makes a slight mistake and fails to tuck it away, least anticipated by Romelu Lukaku inside the box, who takes a nudge off the ball as it goes for goal kick and referee calls it half-time.

00:13 IST: Free-kick for France, near the edge of the boxafter a foul on Paul Pogba by Moussa Dembele. Griezmanntakes it, but the ball failed to get elevation as it hits the wall. One minute added for half-time. Still goalless!

00:09 IST: Courtois SAVES!Pavard does well to get past the Belgian defence, but the Belgian goalkeeper makes himself large to keep the shot out. France trying to get hold of the game here.

00:08 IST: Giroud struggling,took a knock as he goes off the field, but he should be fine and return into the game!

00:05 IST: Hazard brought down by Griezmann!Belgium continue to keep possession on the ball.

00:02 IST: Griezmann skies the shot!The Frenchman was in space, unmarked but his shot from outside the box rises above the crossbar.

00:00 IST: Free-kick for France,short one taken as Olivier Giroud does well to get a header which just goes wide. 30 minutes France 0-0 Belgium.

23:57 IST: Samuel Umtiti keeps it out!A brilliant ball from Kevin de Bruyne inside the box but the Barcelona defender does well to keep it away.

23:56 IST: Corner for France -- their first of the night,Griezmann takes it, tucked away by Fellaini. But Frace through Matuidi continue to imply threat, the ball goes out of play. Goal kick for Belgium. 25 goalless minutes!

23:50 IST: Corner for Belgium,came off a Kevin de Bruyne long-ball cleared off by Varane. Chadli takes it but SAVED! The shot from Toby Alderweireld has been kept out by his Tottenham Hotspur teammate Hugo Lloris, who had to stretch to keep it out. France 0-0 Belgium after 22 minutes.

23:42 IST: Chance for France, Pogbaplays a brilliant through ball to find his target-man Mbappe, for whom the ball is a bit heavy as the PSG forward sprints past the Belgian defence before Courtois charges forward to collect the ball.

23:40 IST: 12 minutes on the clock, France 0-0 Belgium. The latter have enjoyed the possession better while France have so far given away the ball too easily.

23:38 IST: Belgium are in the mood here,total dominance on the ball. Though France have maintained a high back-line, trying to keep the Belgian attack out.

23:35 IST: Corner for Belgium,came off a Hazard cross cleared by Samuel Umtiti. Nacer Chadli delivers the ball inside the box, a poor one, goes for a goal-kick.

23:32 IST: Kevin de Bruyne finds Nacer Chadli on the right flank,who tries a put a cross inside the box but the ball is cleared away by Umtiti. Belgium -- the top scorers of the tournament, continue to push France on the backfoot. 4 minutes played. France 0-0 Belgium.

23:30 IST: KICK-OFF! Antonie Griezmannkicks the ball from right to left to get the match underway.

23:28 IST: Eden Hazard for Belgium, Hugo Lloris for Franceexchange the teams sheets, the mandatory coin-toss is done. We are minutes away from the kick-off of the marquee clash.

23:25 IST: Teamshave take on the turf as national anthems take the centre stage. 5 minutes to kick-off!

23:23 IST: France, Belgiumhave line-up in the tunnel. A final spot at stake here. Huge ask and role to play for both the goalkeepers -- Lloris, Courtois.

23:09 IST: Antoine Griezmann has scored seven goals in his last six knockout stage games in major tournaments for France. The man to rely on!

23:08 IST: Lloris levels with his coach: Hugo Lloris makes his 103rd appearance for France in this match, moving level with coach Didier Deschamps in sixth on his country's all-time list.

22:48 IST: France playing XI analysis: Didier Deschamps stays loyal to his 4-2-3-1 formation with Olivier Giroud as a number nine. Blaise Matuidi is back on the left wing. But the France coach will have to face a challenge that nobody expected - Roberto Martinez's Red Devils are going to play in a 3-5-2, super-offensive line-up.

22:47 IST: Belgium playing XI analysis: What does Roberto Martinez have in mind with a 3-5-2 system? The intention is probably to pressure the French players and force them to play on the sides. The midfielders need to help the three-man defence as much as possible. The biggest weakness? The two wingers (Chadli and De Bruyne) will have to run a lot and do a lot defensively, which could also impact their level of performance in attack.

22:05 IST: French fanslook all decked up in anticipation of the key clash. A bit over an hour for kick-off! Team sheets to be out in a few minutes.

21:50 IST: Griezmann to Lukaku, Mbappe to Hazard --all clash under one roof tonight. Regardless the results, expect this to be a thriller of a contest!

21:05 IST: Belgiummeanwhile, looked to have enjoyed their final training session ahead of the key clash. A place in the FIFA WORLD CUP 2018 FINAL at stake!

21:01 IST: French fanslook geared up for the marquee clash. It's one shot at the final, no second chances!

@FrenchTeam fans were the latest set of fans to join us for #WorldCup Driver!

21:00 IST: Hello and welcome to the live commentary from the first semi-final between France and Belgium.

Belgium won 4-3 against France when they met in a friendly match in 2015. Belgium winger Nacer Chadli has said Spanish coach Roberto Martinez deserved credit for the team's success at the 2018 World Cup. Under Martinez, Belgium won Group G ahead of England and impressively rallied back from a 0-2 deficit against Japan to make it a 3-2 win before defeating Brazil 2-1 in the quarterfinals.

Jan Vertonghen Kevin De Bruyne Football
Get the latest updates on SA vs IND 2021-22, check out the Schedule and Live Score . Like us on Facebook or follow us on Twitter for more sports updates. You can also download the NDTV Cricket app for Android or iOS.