In a viral video, a man is holding a placard with the caption: "Shikhar, Can I have yo shirt". In the same video, it can be seen that Dhawan is almost taking off his shirt while sitting in the dugout 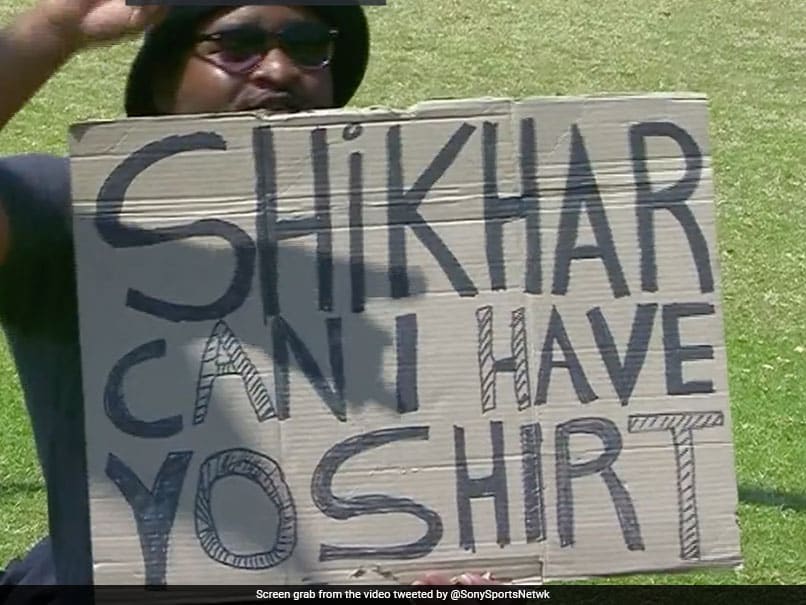 Shikhar Dhawan is a fun character both on and off the cricket field. He often posts hilarious stuff on social media while his on-field antics are sometimes quite funny too. In the final ODI of the three-match series against Zimbabwe, where Dhawan is the vice-captain of the Indian cricket team, a similar incident happened. In a video posted on social media, Dhawan could be seen wearing a jersey without his name at the back. Instead, at the place where the name of the player is usually printed, it was taped.

Watch: Shikhar's reaction after fan asks for his "Shirt"

Talking about the match, Shubman Gill was all class on way to his maiden international hundred, taking India to 289 for eight in the third and final ODI against Zimbabwe on Monday. Gill (130 off 97 balls) shared a 140-run stand with Ishan Kishan (50 off 61) who eventually got run out in a rather unusual fashion.

Barring the stand between Gill and Kishan, not much stood out from the Indian innings. Gill, who made his ODI comeback with the series against the West Indies, was a treat to the eye during his innings comprising 15 fours and a six. The 22-year-old played shots all around, with his straight drives and cover drives standing out.

Gill had a few nervous moments in the 90s before he reached the milestone.

Evans appealed for a close leg before call but the DRS was turned down after UltraEdge showed that the ball touched Gill's bat before thudding into the pads. On the same ball however, Kishan was run out at the other end after he left his crease for a quick single, but Gill was preoccupied with the appeal.

Shikhar Dhawan Shubman Gill Cricket
Get the latest updates on Fifa Worldcup 2022 and check out  Fifa World Cup Schedule, Stats and Live Cricket Score. Like us on Facebook or follow us on Twitter for more sports updates. You can also download the NDTV Cricket app for Android or iOS.