The cricket fans all-over the world, got to witness a heartfelt moment when Ishan Kishan and Kuldeep Yadav came to laud Raza after his dismissal. 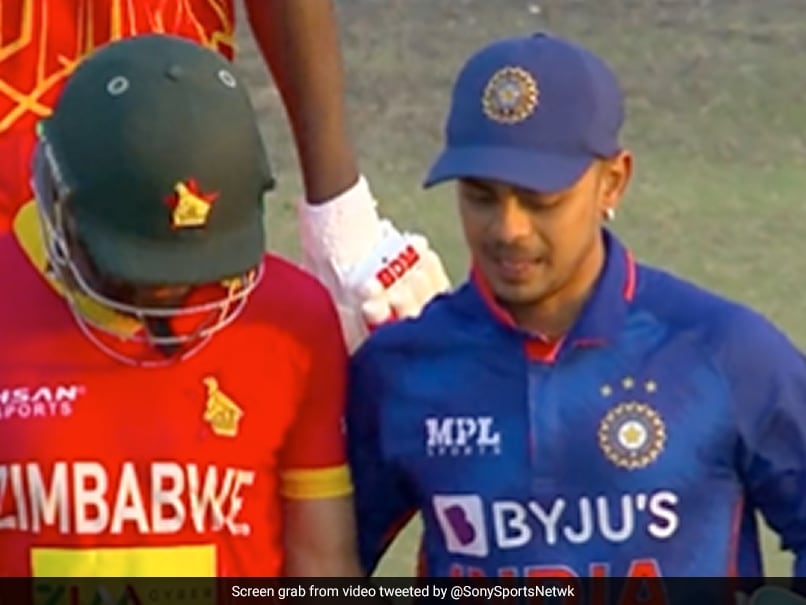 Sikandar Raza garnered a lot of applause as he scored a century for Zimbabwe while chasing a mammoth target of 290 against India in the third and final ODI of the three-match series on Monday at Harare. With Shubman Gill's maiden international century, the KL Rahul-led side posted 289/8 in 50 overs. It was then, Raza took the matter into his hands to smash 115 and leave Zimbabwe needing 17 runs off 12 balls for victory. But, India had the last laugh as he was caught by Gill in the penultimate over, who took a fantastic catch to dismiss Raza. Apart from the brilliant catch, the cricket fans all-over the world, got to witness a heartfelt moment when Ishan Kishan and Kuldeep Yadav came to laud Raza after his dismissal.

In a viral video, Raza was seen getting disheartened after he was caught by Gill at long on. Seconds later, Ishan Kishan and Kuldeep Yadav came forward and patted Raza for his ultimate knock and were seen comforting him.

First with the bat and then with a diving catch, this man won our hearts more than once today

Coming to the match, after India captain KL Rahul won the toss and batted, the tourists posted 289-8 in 50 overs. Zimbabwe were all out for 276 in reply with three balls remaining.

The tourists looked set for victory when they reduced the home side to 122-5 with all the regular scorers bar Raza back in the pavilion. But Pakistan-born Raza shrugged off poor form in the first two matches to smash 115 and leave Zimbabwe needing 17 runs off 12 balls for victory.

The tail could not deliver, and a gallant run chase by Zimbabwe came up short.

Gill smacked 130 off 97 balls, hitting 15 fours and a six. Ishan Kishan (50), Shikhar Dhawan (40) and Rahul (30) also contributed with the bat. The breakthrough century for 22-year-old Gill came less than a month after he came agonisingly close, scoring an unbeaten 98 against the West Indies in Port of Spain.

He shared a 140-run third-wicket partnership with Kishan, who reached his half-century before being run out by Tony Munyonga.

KL Rahul Zimbabwe vs India 2022 Cricket
Get the latest updates on Fifa Worldcup 2022 and check out  Fifa World Cup Schedule, Stats and Live Cricket Score. Like us on Facebook or follow us on Twitter for more sports updates. You can also download the NDTV Cricket app for Android or iOS.