The Olympic qualification was at stake in three categories but all three Indians cut a sorry figure as Manish (67kg), Sunil Kumar (87kg) and Ravi (97kg) exited without a fight. 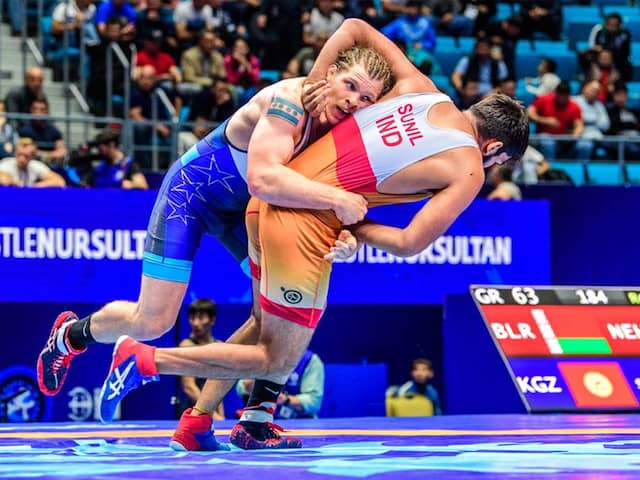 Ravi won India's first bout at the World Championships before suffering a defeat by fall as the country's Greco-Roman wrestlers continued their disappointing show on Sunday. The Olympic qualification was at stake in three categories but all three Indians cut a sorry figure as Manish (67kg), Sunil Kumar (87kg) and Ravi (97kg) exited without a fight. The four wrestlers in action on the opening day had not won a single bout and three of them did not even score a point but Ravi managed to win a bout against Chinese Taipei's Cheng Hao Chen.

"The standard of competition here is too high for our boys. It's very tough out there. The results are on expected lines," said India's national coach Hargobind Singh.

Ravi opened up a 2-0 lead with a take-down move and remained defensive until the end of the period. In the second period, the Taipei wrestler lost a point due to passivity and Ravi took advantage by employing a gut-wrench from the ground position. There was not much action in the bout as the Indian won 5-0.

In the next bout against Czech Republic's Artur Omarov, Ravi lost two points for fleeing the mat and then conceded a passivity point.

Omarov finished the bout in a jiffy as he made the score 7-0 with two gut-wrench moves and then pinned his opponent, 27 seconds before the end of the first period.

Coach Hargobind said Gurpreet Singh will be in action on Monday and he is capable of putting up a better fight.

"Gurpreet is best in this lot. We are hoping that at least he will finish in top-six and clinch an Olympic quota. If you ask me about, there's no chance," he said candidly.

Gurpreet will compete in 77kg and will open his campaign against Austria's Michael Wagner. There are two more Indians in the fray. Manish will wrestle with Finland's Lauri Johannes Maekhonen in 60kg while Naveen will clash with Cuba's Oscar Pino Hinds in 130kg.