Bayern Munich star Thomas Mueller has emerged as an unexpected fan of Virat Kohli and Team India at the Cricket World Cup. 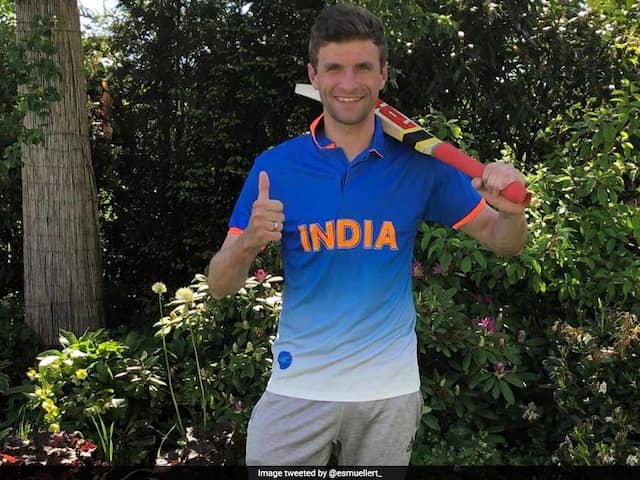 Thomas Mueller posed in a Team India jersey as he threw his weight behind captain Virat Kohli.© Twitter/Thomas Mueller

After an agonising wait, Virat Kohli and Team India will finally be seen in action in World Cup 2019 when they begin their quest for a third title against South Africa at The Rose Bowl in Southampton on Wednesday. India are the last of the 10 teams to launch their challenge in England and Wales. India, one of the best supported cricket teams in world cricket, have got many good luck messages ahead of their opening World Cup 2019 clash but there seems to have been a sudden increase in prominent names from the world of football throwing their weight behind captain Virat Kohli and his team. The latest to declare his support for India is none other than Germany and Bayern Munich star striker Thomas Mueller.

The 29-year-old German football star took to Twitter to reveal that India skipper Virat Kohli had often supported the German national football team in the past, and Mueller returned the favour.

Thomas Mueller, himself a World Cup winner with Germany in 2014, posted a picture of him wearing an Indian cricket shirt and holding a bat in one hand, Mueller tweeted: "I wish all participants of the Cricket #WorldCup2019 good luck & thrilling matches. Especially I cross my fingers for @imVkohli, the captain of the Indian team. He's a fan of @DFB_Team and supported it multiple times in the past #Cricket #GermanyCheersForIndia."

I wish all participants of the Cricket #WorldCup2019 good luck & thrilling matches. Especially I cross my fingers for @imVkohli, the captain of the Indian team. Hes a fan of @DFB_Team and supported it multiple times in the past#Cricket #GermanyCheersForIndia #esmuellert pic.twitter.com/hwS4apAlIE

As expected, it didn't take long for Thomas Mueller's tweet to go viral with stunned Indian fans showing their surprise.

Doesn't get better than this .support coming all over from Germany. @esmuellert_ thanks for your support man . Appreciate it

Muller says it's the entire German National team cheering for India, but still it feels good that a top Football star cheering another country for other sport...hope this happens more...

This made my day

Thank you so much. Didn't expect this at all. You're the best.

Wow! I can't believe thisthan you so much Muller

Love you all the best for next session

Thank you Muller didn't expected cricket tweet from u

You have won a billion hearts by saying that

Just before the start of World Cup 2019, Chelsea FC and Brazilian superstar David Luiz too had tweeted his support for the two-time world champions.

David Luiz wished good luck to Virat Kohli and the Indian cricket team and said that he would be supporting them in the World Cup 2019.

As you all know I love both football & cricket. I asked @DavidLuiz_4 who he was backing for the @cricketworldcup & his reply was @BCCI & captain @imVkohli . He had a special message for the captain. #ViratKohli pic.twitter.com/2kKqwSnrtX

India begin their assault at a third 50-over World Cup title against a South African team in turmoil after losing their opening two matches.

Thomas Muller Cricket
Get the latest Cricket news, check out the India cricket schedule, Cricket live score . Like us on Facebook or follow us on Twitter for more sports updates. You can also download the NDTV Cricket app for Android or iOS.