Virat Kohli got a message of good luck from Brazil and Chelsea star David Luiz. 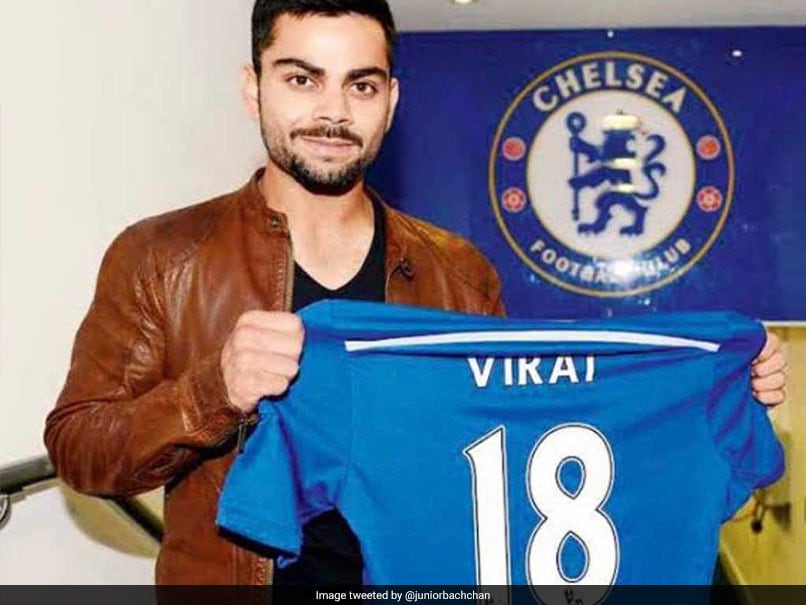 Virat Kohli was clicked holding a Chelsea jersey in 2014.© Twitter

World Cup 2019 is round the corner with hosts England getting the tournament underway on May 30 against South Africa. England along with India and Australia are the big favourites to lift the coveted trophy. A few days back, England football captain Harry Kane had posted a picture with India cricket captain Virat Kohli, who in turn wished him for the Champions League final between Tottenham Hotspur and Liverpool. Another footballer who seems to be keep tracking of cricket's showpiece event is Chelsea's star defender David Luiz. The former Brazilian captain, in a video, had a special message for Virat Kohli and the Indian team.

David Luiz wished good luck to Virat Kohli and the Indian cricket team and said that he would be supporting them in the World Cup 2019.

As you all know I love both football & cricket. I asked @DavidLuiz_4 who he was backing for the @cricketworldcup & his reply was @BCCI & captain @imVkohli . He had a special message for the captain.#ViratKohli pic.twitter.com/2kKqwSnrtX

In 2014, Virat Kohli had shown his love for Chelsea Football Club when posted an image of him holding the club's famous blue jersey.

On cricketing front, Virat Kohli will lead India for the first time in a 50-over World Cup.

India will open their campaign against South Africa on June 5. India, who are one of the favourites, didn't have the best of starts to their World Cup journey, losing their opening warm-up game to New Zealand.

India lost to New Zealand by six wickets, with the batsmen, including Virat Kohli, failing to get going. Ravindra Jadeja was the surprise top-scorer for India, slamming 54 off 50 balls.

It was a walk in the park for New Zealand in the chase as they reached the target in only 37.1 overs with Kane Williamson (67) and Ross Taylor (71) helping themselves to half-centuries.

Virat Kohli and his team will face Bangladesh on May 28 in their second warm-up game.

Brazil David Luiz Cricket
Get the latest updates on ICC T20 Worldcup 2022 and CWG 2022 check out the Schedule, Live Score and Medals Tally. Like us on Facebook or follow us on Twitter for more sports updates. You can also download the NDTV Cricket app for Android or iOS.