Team Profile, Bangladesh: The Tigers Yet To Roar At This Level

Bangladesh have not been able to justify their long existence at the One-day International level and World Cup 2019 comes as another chance to redeem themselves. 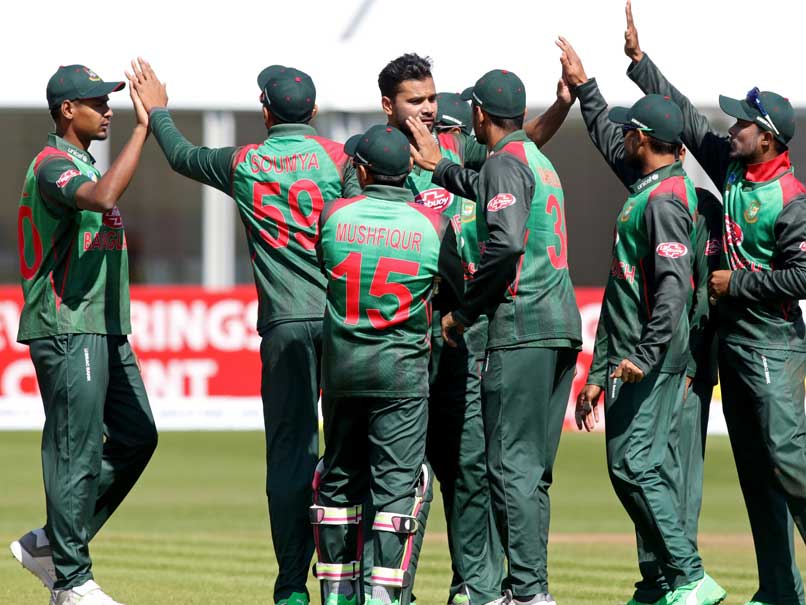 Mashrafe Mortaza has declared that World Cup 2019 in England and Wales will be the last.© AFP

At 35, Mashrafe is one of the oldest serving players of the Bangladesh squad and he has gone on record to state the World Cup 2019 will be his last. He recently performed well during the Windies' tour to Bangladesh in 2018, most notably for his 3/30 spell in the first ODI.

His best World Cup performance came against India in 2007, where his spell of 4/38 helped Bangladesh reach the Super Eight.

Tamim was always a class act and he has reemphasised that in the series against the Windies, where he scored two hundreds in three ODIs.

His stints in the World Cup however haven't been particularly on par with his reputation.

Mahmudullah is a reliable batsman as seen in the series against New Zealand where he scored 146 in the Hamilton Test, followed by a 67 in Wellington. At 33, he also brings much-needed experience into this squad, despite his recent inconsistencies in ODIs.

His best performance came in the last World Cup, where he scored 128 not out against New Zealand.

The wicketkeeper-batsman has been a veteran in the Bangladesh line-up and is experienced, despite the fact that his recent stint against New Zealand was sketchy, and his ODI average this year is only 15.33.

Mushfiqur's best performance in the World Cup came against England in 2015, where he scored a match winning 89 of 77 balls.

Shakib's best bowling figures of in the World Cup are against New Zealand (4/55), while his best batting figures coming against Afghanistan, (63 off 51 balls).

Sarkar's World Cup performances have hardly been of any note, with his best score of 51 coming against New Zealand.

Das' performances in the 2018-19 season haven't been impressive, with an aggregate of just 18.33, with the only notable performance coming against India at Dubai (121).

This will be Liton Das' first World Cup.

The middle order batsman scored 102 against New Zealand at Dunedin in the most recent ODI that Bangladesh had played, making up for the ban he served for disciplinary issues.

His previous World Cup stint was modest, with his best score being 53 against Sri Lanka.

The young off-break bowler has taken 20 wickets in the 2018-19 ODI season, making him a very good prospect for Bangladesh's chances in the World Cup.

The top-order batsman has played well in the New Zealand ODI series, scoring 62 and 57. His season average of 62.33 made him an automatic selection, with the highest score being 63 at the Asia Cup vs Sri Lanka.

An important player in the Bangladesh set-up, Rubel has performed consistently, taking 23 wickets in 2018 in ODIs.

Rubel has taken 13 wickets in the two World Cup's that he's been a part of. His best figures came against England in the match-winning 4/53.

The strike bowler for Bangladesh, Mustafizur's fitness is an issue due to a recent ankle injury. However, his exploits in the IPL where he took 24 wickets for SunRisers Hyderabad in his first season, made him an automatic selection.

Saifuddin is handy with both ball and the bat, as shown in the New Zealand ODI series, where he had a batting average of 32.

Mosaddek has been a prolific presence at Bangladesh's middle-order, scoring runs at a brisk pace, while also taking wickets on a few occasions. He has a batting average of 31 since he made his ODI debut in 2016, while he has also taken 11 wickets.

A surprise entry into the squad for the injured Taskin Ahmed, Abu Jayed is uncapped in ODIs, but he has taken a total of 15 international wickets in five Tests and three T20s.

Mashrafe Mortaza World Cup 2019 Cricket
Get the latest updates on Fifa Worldcup 2022 and check out  Fifa World Cup Schedule, Stats and Live Cricket Score. Like us on Facebook or follow us on Twitter for more sports updates. You can also download the NDTV Cricket app for Android or iOS.