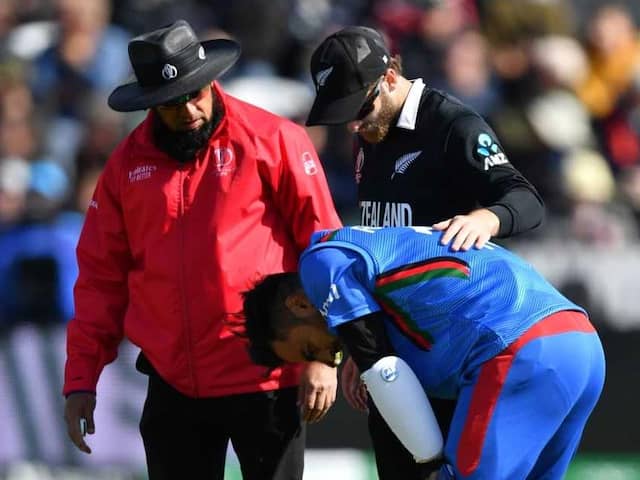 Rashid Khan was unable to bowl against New Zealand© AFP

Rashid Khan, Afghanistan's premier leg-spinner, was unable to bowl against New Zealand at the World Cup 2019 match in Taunton on Saturday after being hit on the head off a bouncer bowled by New Zealand fast bowler Lockie Ferguson. The incident took place in the 34th over of the match when Rashid Khan failed to judge Lockie Ferguson's length and tried to duck but the ball ricocheted into the stumps as he was eventually dismissed for a duck. According to AFP, Rashid Khan, failed a first concussion soon after but Afghanistan skipper Gulbadin Naib believes his leg-spinner should recover in time for his side's next match on June 15 against South Africa.

"He's feeling now better. The doctor said don't go to the field but now he's feeling well. So he needed rest. So obviously we have a couple of days. He's fine now," Naib told reporters.

"I asked the physio if he needed rest, some headache. We have a rest of one week for the other game. So now he's feeling well. So he should go to hospital and check for some tests.

"He's well. Afghani people is strong. So it's just a small thing."

Afghnaistan suffered a seven-wicket thrashing in the match against New Zealand in absence of Rashid Khan's bowling.

Kane Williamson led by example as the New Zealand captain's 79 not out maintained their 100 percent start to the World Cup 2019.

New Zealand's third successive victory kept them on course to make the semi-finals in the 10-team tournament.

Afghanistan Rashid Khan World Cup 2019 Cricket
Get the latest Cricket news, check out the India cricket schedule, Cricket live score . Like us on Facebook or follow us on Twitter for more sports updates. You can also download the NDTV Cricket app for Android or iOS.