Mitchell Starc revealed a breakfast confrontation with a bantering fan inspired his ferocious spell at Lord's. 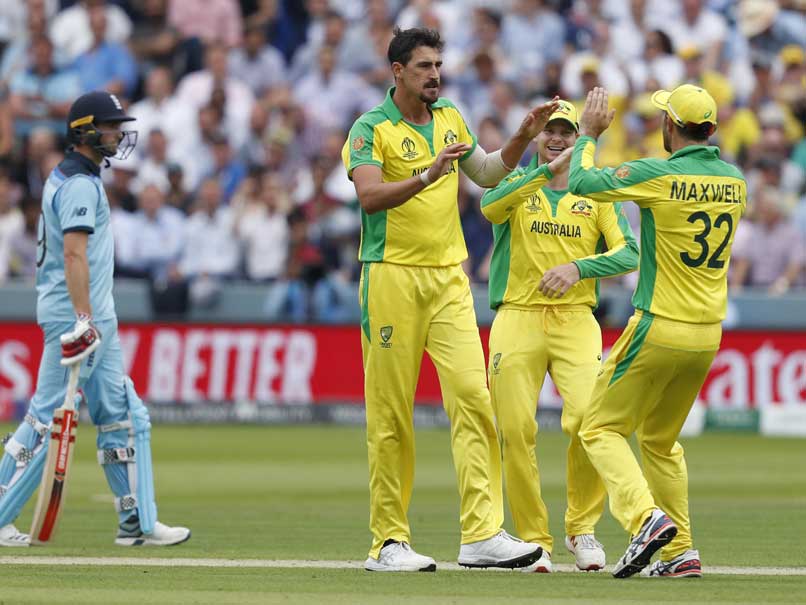 Mitchell Starc finished with an impressive spell of 4/43.© AFP

Mitchell Starc dismissed Ben Stokes with a stunning yorker to end his pursuit of victory and England lost to Australia by 64 runs in the World Cup 2019 at Lord's in London on Tuesday. With the triumph, Australia booked a semi-finals berth and put hosts England in a situation where they desperately need to win both their remaining matches. All-rounder Ben Stokes top-scored with 89 runs but failed to drive England past the victory line as Mitchell Starc struck the right chord at the right time and stunned Ben Stokes with a yorker.

The International Cricket Council (ICC) shared the video of Stokes' dismissal saying: "Starc gets Stokes with a yorker! #CmonAussie | #CWC19".

The fans flooded the tweet with lovely comments from all across the globe, with many calling Starc's toe-crusher the "ball of the tournament".

Set batsman on the crease
Wow, what a delivery

One of the best yorkers I have seen

It's not batsman's fault, that was bowler's outstanding delivery .

Ball Of The Tournament I Think

Starc finished with an impressive spell of 4/43, besides Jason Behrendorff's five-wicket haul, as Australia bowled out England for 221 in their chase of 286.

Later, the Australian left-armer revealed a breakfast confrontation with a bantering fan inspired his ferocious spell at Lord's.

Starc's wife Alyssa Healy, who plays for the Australia Women's team, brought the incident to light on Twitter, claiming an England supporter had fired up her husband with his taunts at the team hotel earlier in the day.

Starc confirmed he had been targeted but insisted the jibes weren't especially hurtful.

"It's all been good fun throughout the tour around the crowds and at the hotel. It's just part and parcel of a World Cup," he added.

Starc believes the holders' comprehensive win was the perfect preparation for the World Cup knockout stages after Aaron Finch's side sealed a place in the semi-finals.

Mitchell Starc Cricket England vs Australia, Match 32 World Cup 2019
Get the latest updates on T20 World Cup, check out the T20 World Cup Schedule and Live Score . Like us on Facebook or follow us on Twitter for more sports updates. You can also download the NDTV Cricket app for Android or iOS.