Ben Stokes made 89 against Australia but, as with the all-rounder's unbeaten 82 against Sri Lanka, it was not enough to secure victory. 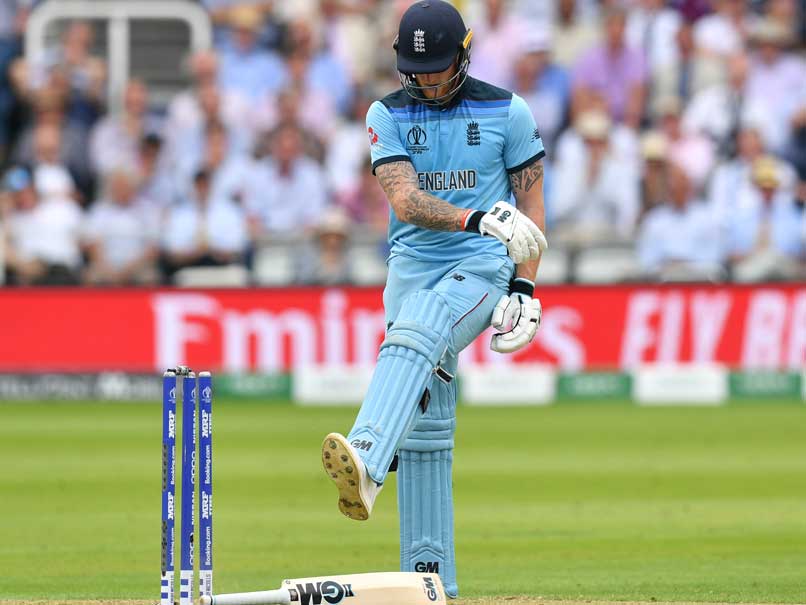 Ben Stokes failed to power England to victory on a second consecutive occasion in the World Cup 2019 as they suffered a 64-run defeat to Australia at Lord's in London on Tuesday. While Australia booked a semi-finals berth with the win, England come in circumstances where they need to win both their remaining league stage matches to qualify for the final four. The Eoin Morgan-led side next faces India, who have been unbeaten in the World Cup 2019, in Birmingham on Sunday. Ben Stokes believes England's home ODI series win over India last year will boost keep his side's confidence high.

"We've got a great record against India in England, but they are another team who are in good form, so hopefully we can bring our best game," Stokes said.

Stokes defiantly stated "This is our World Cup" after a thumping defeat by Australia cast doubt on the pre-tournament favourites' hopes of qualifying for the semi-finals.

Set a target of 286 to beat the reigning champions, England were dismissed for 221. The reverse meant England had lost two straight pool matches -- their first back-to-back defeats in one-day internationals since January 2017 -- after also falling short in a run-chase in a 20-run defeat by Sri Lanka.

Stokes made 89 against Australia but, as with the all-rounder's unbeaten 82 against Sri Lanka, it was not enough to secure victory, with England now having lost three pool matches in total following an earlier defeat by Pakistan.

"Look, everybody's obviously disappointed in the last two games but, you know, this is our World Cup and we are going to go about it the way we know how we play best," Stokes said

That way has been to bat aggressively but in their past two matches some ill-judged strokes have caused the downfall of their batsmen, with England slumping to 26/3 against Australia after left-arm quicks Jason Behrendorff (5/44) and Mitchell Starc (4/43) both struck telling early blows.

England may now have to beat both in-form India and New Zealand in their final two pool matches if they are to keep alive their hopes of winning the World Cup for the first time.

In common with Australia, they are teams England have not defeated at a World Cup since 1992.

Nevertheless, a defiant Stokes said: "That's what's made us so successful in the last four years. Two back-to-back losses can sometimes make you as a team think differently, but we are not going to go away from our method of playing.

"We just need to adjust to situations and then conditions, but we are not for one minute going to take a backward step, especially in these last two (group) games.

"It's one of the biggest times and greatest times to be a cricketer, which is to represent your country at a World Cup."

Both of England's two recent defeats have coincided with the absence of in-form opening batsman Jason Roy, suffering from a torn hamstring.

James Vince, Roy's replacement, was bowled for a second-ball duck by Behrendorff after managing just 14 against Sri Lanka.

Ben Stokes World Cup 2019 Cricket England vs Australia, Match 32
Get the latest updates on T20 World Cup, check out the T20 World Cup Schedule and Live Score . Like us on Facebook or follow us on Twitter for more sports updates. You can also download the NDTV Cricket app for Android or iOS.