India have never lost to Pakistan at a World Cup, winning at the last two tournaments, and are favourites to extend that run. 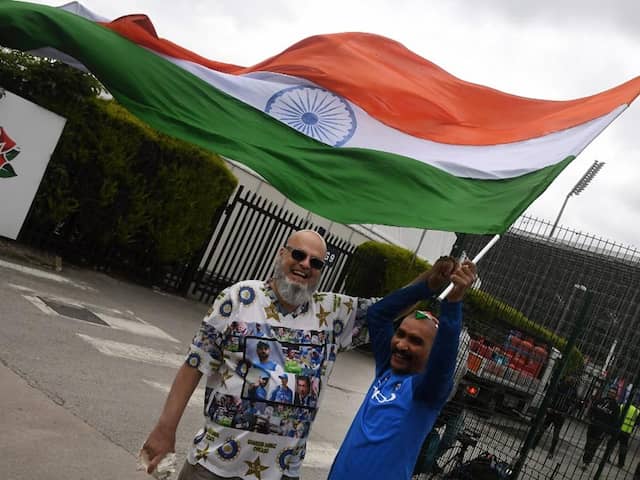 Cricket fever gripped India on Saturday ahead of a World Cup 2019 showdown with arch-rival Pakistan in a sporting matchup considered one of the world's fiercest. The South Asian neighbours, who share a history of brotherhood and bloodshed, will meet Sunday in a long-awaited group stage clash in Manchester. Tapping into the frenzy, the "world's largest bat" was unveiled in the southern city Chennai, and a popular Indian rapper who goes by the name Divine was set to perform to his viral 'SockThem' World Cup-themed song in Manchester Saturday. The clip has been viewed 32 million times on YouTube so far.

The bat, which is 15.5 metres long (51 feet) and weighs 6,600 kilos (14,550 pounds), was unveiled by India's World Cup winning captain Kapil Dev in a mall on Friday as fans jostled to scribble their good luck messages on it.

Popular bars in the capital Delhi have announced happy hours and malls have put up giant screens to show the match. They are also offering virtual reality booths to give shoppers a real feel for the sporting clash.

For some though, it's all about the outcome.

"I am just praying India wins the match. If we lose, it will be nothing short of a national disaster," said software engineer Arihant Jaiswal.

India's fan-club -- the Bharat Army -- boasts tens of thousands of followers and has lined up a gala programme Saturday called "Bharat ke Saath", or "With India", in Manchester.

The current tense political situation between the nuclear-armed neighbours has added an extra edge to their highly-anticipated group stage matchup.

Some Indian fans and ex-players called for their team to boycott the World Cup match.

Pakistan toured India in 2012/13 for a series of one-day internationals and Twenty20 matches but they have not faced each other in a major tournament since.

Rain is forecast for Sunday's match however, and could bring about an early sodden end to the highly anticipated game.

India have never lost to Pakistan at a World Cup, winning at the last two tournaments, and are favourites to extend that run.

The match will be broadcast at primetime in both cricket-obsessed countries and a billion people are expected to tune in.

Advice has been flowing in thick and fast for the Indian team from former greats, including batting great Sachin Tendulkar who asked the players to throw caution to the wind when facing in-form Pakistani pacer Mohammad Amir.

"I wouldn't go in with a negative mindset of playing dot balls against him. If you get an opportunity, I would encourage India to play their shots and stay positive," Tendulkar told India Today website.

The cricket rivalry between India and Pakistan dates back to partition in 1947. The two countries have since fought three wars, two of them over the disputed region of Kashmir.

India Cricket Team World Cup 2019 India vs Pakistan, Match 22 Cricket
Get the latest Cricket news, check out the India cricket schedule, Cricket live score . Like us on Facebook or follow us on Twitter for more sports updates. You can also download the NDTV Cricket app for Android or iOS.