Ross Taylor's knock of 74 proved crucial against India. He feels that the New Zealand are now better equipped than in 2015 to win the World Cup. 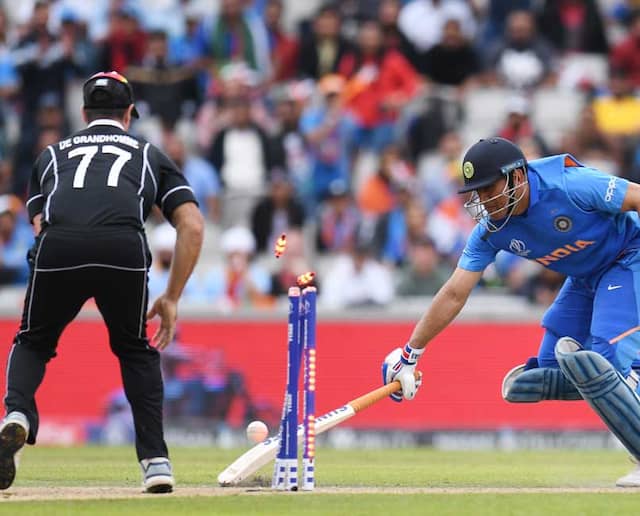 MS Dhoni's run-out was a heart-breaking moment for the fans as hopes of India reaching the final ended with his dismissal in the World Cup 2019 semi-final on Wednesday. New Zealand batsman Ross Taylor, after an 18-run victory against India at Old Trafford, admitted that MS Dhoni's wicket was the match defining moment for his team as the wicketkeeper-batsman appeared daunting enough as a finisher. After defeating India in Manchester, New Zealand are the first team to reach the final.

"The run out broke India's heart I suppose because Dhoni has won the game from that situation many a times. Once we got him, we were pretty confident of the result. We are happy and proud to be in the final, regardless of who it is going to be between England and Australia," Taylor said.

"The big boys up front were fantastic getting those three wickets and from there it was nice to be ahead of the game. Jadeja and Dhoni nearly took it away from us. There was some brilliance out there, the catch of Jimmy Neesham, the run-out of Martin Guptill without even the keeper there. Those highlights in a few years' time will be something the team will never forget," Taylor added.

Ross Taylor's knock of 74 proved to be crucial in the World Cup semifinal against India, but what was even more challenging for the former skipper was having to resume his innings on Wednesday morning after the game was stopped due to rain on Tuesday in the 47th over of the innings.

"I woke up at three in the morning so I didn't know how I was going to go out and bat. It was such a strange one, it was a Test match feeling almost, being not out overnight and being a bit restless.

"But we talked about 240 being what Kane (Williamson) and I thought was a very competitive total. I don't think a lot of people believed us. It was a really slow wicket and if anything it got better to bat once it rained.

Taylor also added that the New Zealand are now better equipped than in 2015 to win the World Cup. "It was strange last time. We played so well throughout the tournament but then jumped on a plane and played in a country we hadn't played in for the whole tournament.

"I'd be lying if I said we weren't a bit overawed by the change of scenery. I think we know what to expect, the pressures that come with it, we've been there before. You just have to enjoy it, it's the Home of Cricket, I can't think of a better place to play a final. Whether it's England or Australia, we have to enjoy the moment, put our best foot forward and hope for the best," he said.