David Warner scored 107 runs off 111 balls to power Australia towards a 41-run win over Pakistan in Taunton. 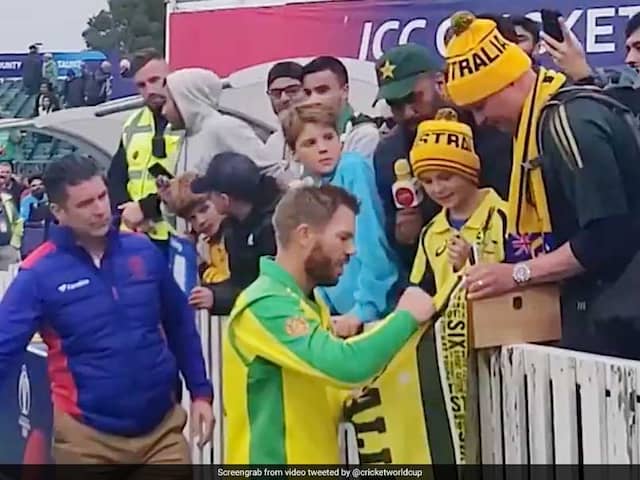 David Warner came back to his fluent best as the left-handed batsman smashed his 15th One-day International hundred to set up Australia's much-needed win against Pakistan on Wednesday at Taunton. In the previous match against India, David Warner was criticised for his slow approach, but he silenced his critics by scoring 107 off 111 deliveries that powered Australia to a score in excess of 300. Warner was awarded man of the match for his brilliance with the bat. The 32-year-old, however, gave his award to a young Australian fan, a gesture hailed as "wonderful" by the Cricket World Cup.

"David Warner made this young Australia fan's day by giving him his Player of the Match award after the game. Wonderful gesture. #SpiritOfCricket #CWC19," Cricket World Cup captioned the video on Twitter.

The young kid was over-joyed by Warner's gesture towards the end of the game as the cricketer signed his player of the match award and gave it to him.

Speaking to the ICC, the youngster said it feels awesome. "We were just waving the flag and he just came over and gave it to us," he said.

When asked about whether he is a David Warner fan, the kid said that "yes, I really like him and I am happy with Australia's win".

For Pakistan, spearhead Mohammad Amir was clinical with the ball as he bagged five wickets for just 30 runs in his quota of 10 overs to bundle out the power-packed Australian batting line-up for a mere 307 in 49 overs.

Pakistan did create a few chances during the chase but they kept on losing wickets at regular intervals and in the end, lost by 41 runs. This was the second loss for the Sarfaraz Ahmed-led side who will next take on their arch-rivals India on Sunday.