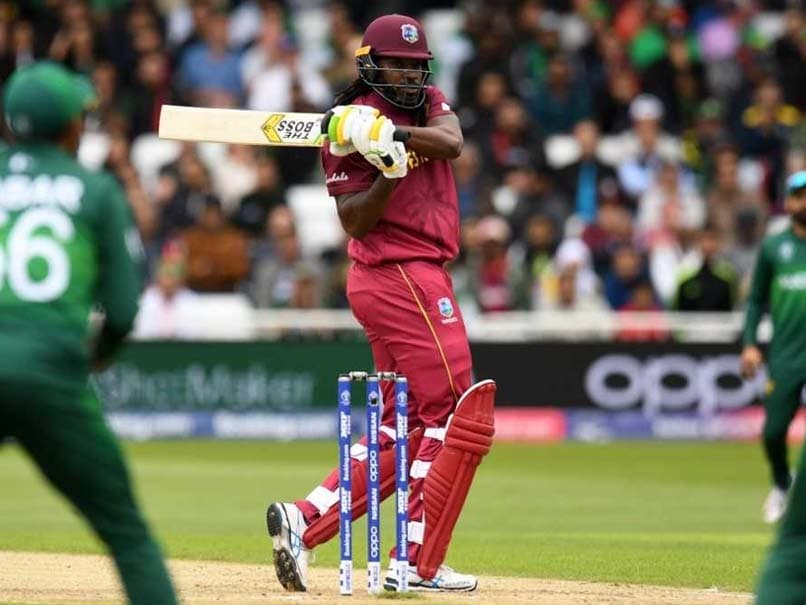 Chris Gayle broke the record for the most sixes hit in World Cup history.© AFP

West Indies crushed Pakistan by seven wickets in a one-sided World Cup match at Trent Bridge on Friday, with the two-time champions showing they are a resurgent force in the one-day game. Fast bowler Oshane Thomas took four wickets as Pakistan were bundled out for their second-lowest World Cup total of 105 in just 21.4 overs on the second day of the competition in England and Wales. West Indies cruised to victory in just 13.4 overs, Chris Gayle top-scoring with 50. He reached his half-century off 33 balls with three sixes and six fours before he was dismissed off the next ball he faced.

During his innings Gayle, who calls himself the "Universe Boss", broke the record for the most sixes hit in World Cup history.

Nicolas Pooran smashed paceman Wahab Riaz for a huge six over the square-leg boundary to give the 1975 and 1979 world champions an ideal start to their campaign.

"It was a good game. I think the bowlers were outstanding today," said Holder. "We kept our foot on the accelerator. We've eased off in the past but it was good to see the killer instinct today.

"We wanted to be aggressive. It's the nature of our cricket with bat, ball and in the field.

"We've definitely come to win this World Cup but I just want us to enjoy our cricket, play fearless cricket and make the fans back home proud."

Amir had Shai Hope (11), Darren Bravo (0) and Gayle caught in an incisive six-over spell, but the batsmen had not put enough runs on the board to give the bowlers a chance.

Pakistan's sloppy and vulnerable batting was cruelly exposed by some short-pitched bowling by the West Indies pacemen on a Trent Bridge pitch famous for big totals.

Opener Fakhar Zaman and Babar Azam were the joint top-scorers with 22 each in an abysmal display of batting.

The only other batsmen to reach double figures were Riaz, who scored 18, and Mohammad Hafeez (16).

Pakistan captain Sarfaraz Ahmed, said: "Very disappointed at the batting. I was very confident before the match, batting was a key point but we didn't apply it to the short ball.

"Credit to the West Indian bowlers, they bowled really well. We have to take time if the bowlers are bowling like that. We lose so many wickets and that's why we lost the match."

Trent Bridge, Nottingham Cricket West Indies vs Pakistan, Match 2
Get the latest updates on Fifa Worldcup 2022 and check out  Fifa World Cup Schedule, Stats and Live Cricket Score. Like us on Facebook or follow us on Twitter for more sports updates. You can also download the NDTV Cricket app for Android or iOS.