Eoin Morgan led England when they suffered an early exit in the 2015 World Cup in Australia and New Zealand. 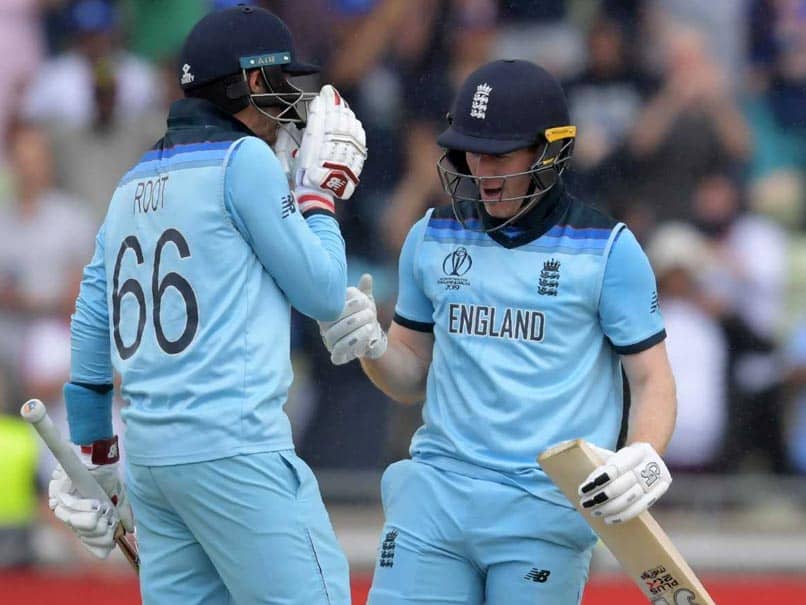 Eoin Morgan finished on 49 not out and hit the winning runs for England.© AFP

England captain Eoin Morgan heaped praise on his team after an eight-wicket victory over Australia in the second semi-final at the World Cup 2019 in Birmingham on Thursday. The 32-year-old left-handed batsman led England when they suffered an early exit in the 2015 World Cup in Australia and New Zealand. Eoin Morgan is happy that his team turned around its fortunes in four years and made it to the summit clash at home. "If you had offered us the position to play in a final the day after we were knocked out of 2015 World Cup, I would have laughed at you," Eoin Morgan said as quoted by AFP.

Morgan urged England "not to shy away" from the pressure of the World Cup final. The hosts will face New Zealand at Lord's on Sunday, with both sides bidding to win the title for the first time.

"I think Sunday's not a day to shy away from, it's a day to look forward to, much like today," Morgan said.

"We have created the opportunity to play in a World Cup final. It will be a matter of the same again, trying to produce everything that we can performance-wise."

But having seen the Black Caps reduce India to 5-3 before going to achieve a surprise 18-run semi-final win on Wednesday, Morgan was taking nothing for granted against a side who will be appearing in their second successive World Cup final.

"They bowled extremely well and took their opportunities. They will be a difficult side to beat on Sunday, so we are looking forward to it," he said.

By getting to the final, England have assured the match will be screened on free-to-air television in Britain -- the first time this has happened for one of their major home fixtures since the 2005 Ashes series.

"That's very cool," said Morgan. "Particularly given the 2005 Ashes for me was sort of the day cricket became cool. It's really good for the game and it's the game I love."

England have risen to the top of the one-day international rankings since a woeful first-round exit at the last World Cup four years ago and Thursday's success was their first win in a knockout match at the tournament since 1992, when they made the last of their three losing appearances in the final.

Morgan, asked about the cynicism surrounding England's knockout prospects, replied: "I think we're quite cynical people, who never quite give people credit when it's due.

"We grow up around it. It is the way we are and we sometimes enjoy it too much.

"I think we have learnt to enjoy ourselves, particularly days like this, even if they don't go well.

England were dominant from the start at Edgbaston against Australia, who had never lost any of their previous seven World Cup semi-finals.

Despite losing the toss, England reduced Australia to 14-3, with man-of-the-match Chris Woakes striking two early blows on his way to a return of 3-20.

Although Australia recovered to 223 all out, it never looked like being enough, especially when England opener Jason Roy was blazing his way to 85 as the holders were denied an early wicket.

Morgan finished on 49 not out and hit the winning runs as England won with a mammoth 107 balls to spare.

Eoin Morgan World Cup 2019 Cricket New Zealand vs England, Final Australia vs England, 2nd Semi Final
Get the latest updates on IPL 2021, IPL Points Table , IPL Schedule 2021 , live score . Like us on Facebook or follow us on Twitter for more sports updates. You can also download the NDTV Cricket app for Android or iOS.