Despite winning the toss and batting first, Australia were humbled as they collapsed to 223 all out before allowing England to sweep to victory in just 32.1 overs. 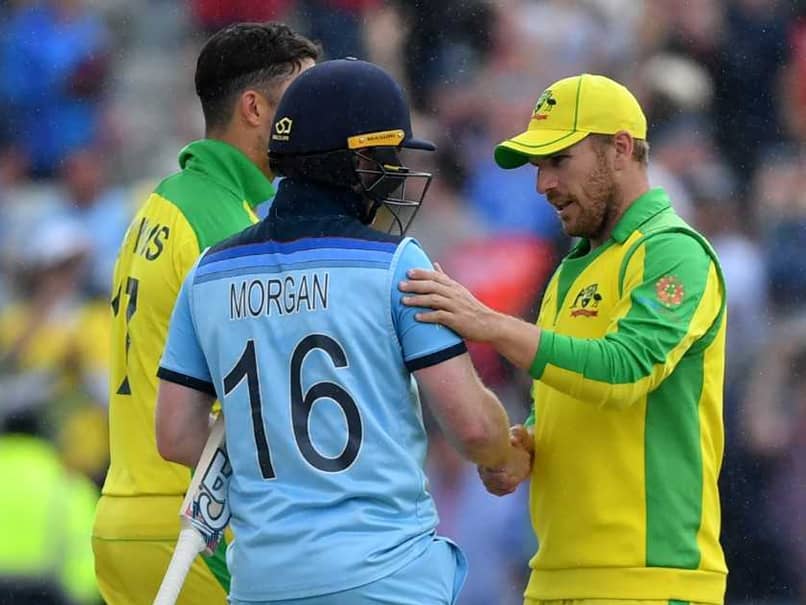 England chased down the target in just 32.1 overs.© AFP

Australia captain Aaron Finch admitted his side were "outplayed" by England after the World Cup holders saw their reign ended in a semi-final thumping on Thursday. Despite winning the toss and batting first, Finch's team were humbled as they collapsed to 223 all out before allowing England to sweep to victory in just 32.1 overs. Losing to their arch-rivals in front of a gleeful Edgbaston crowd was a painful way for Australia to surrender the trophy they had won four times in the past five tournaments.

But Finch, who was out for a duck, conceded England had been far superior.

"We were totally outplayed today. We expected the new ball to seam a little but they bowled a great length, hitting the stumps a lot," Finch said.

"We had to have a lot things go right for us. We had to take our chances and bowl them out.

England openers Jason Roy, who hit 85 from 65 balls, and Jonny Bairstow, who made 34, took the game away from Australia with a superb 124-run partnership for the first wicket.

"They played exceptionally well. We know how dominant they are when they get on top. You've got a very good cricket team in England," Finch said.

Although Australia had beaten England easily in the league stage at Lord's, they were a shadow of the team that eased into the semi-finals with seven wins from nine matches.

For just the second time in the past seven World Cups, Australia have failed to make the final, but Finch said he was proud of his team's efforts 12 months after they were crushed 5-0 by England in a one-day international series.

"We have a lot of positives from the campaign. We've come a long way from when we were in England a year ago," he said.

"We came here thinking we could win the tournament. We've had backs to the wall and character shown and I'm proud of how the group have progressed but it still hurts."

England will take on New Zealand in the summit clash of World Cup 2019 at Lord's on July 14.

Edgbaston, Birmingham World Cup 2019 Cricket
Get the latest updates on India vs Australia Series, check out the India vs Australia Schedule for 2020-21 and Ind vs Aus live score . Like us on Facebook or follow us on Twitter for more sports updates. You can also download the NDTV Cricket app for Android or iOS.