"By Bits And Pieces, He Ripped Me Apart Today": Sanjay Manjrekar After Ravindra Jadeja's Blistering Knock

Ravindra Jadeja performed both with the bat and ball in India's heartbreaking loss to New Zealand in World Cup semi-finals. 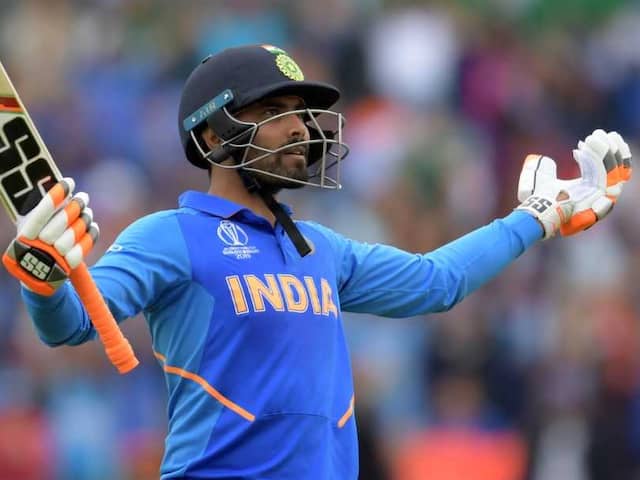 Ravindra Jadeja returned with the figures of 1/34 and also scored 77 off just 59 balls.© AFP

India' World Cup 2019 campaign came to end after they lost to New Zealand in the first semi-final by 18 runs. Chasing a target of 240, India lost their top three batsmen inside four overs with only five runs on the board. Ravindra Jadeja, who has only played two matches in the tournament, performed both with the bat and ball. First, he returned with the figures of 1/34 and then scored quick-fire 77 off just 59 balls. Jadeja might not have gotten India over the line but won many hearts, including that of former India batsman, Sanjay Manjrekar, who had termed him a "bits and pieces" player.

In a video posted by the International Cricket Council (ICC) twitter handle, Manjrekar poked fun at his "bits and pieces" remark for Jadeja. Praising the all-rounder, he said, "by bits and by pieces, he (Jadeja) just ripped me apart today".

"By bits 'n' pieces of sheer brilliance, he's ripped me apart on all fronts."@sanjaymanjrekar has something to say to @imjadeja after the all-rounder's fantastic performance against New Zealand.#INDvNZ | #CWC19 pic.twitter.com/i96h5bJWpE

"Bits and by pieces of sheer brilliance, just proved me wrong on all fronts. This is Ravindra Jadeja that we have not seen very often.

"His highest score in last 40-odd innings had been around 33 (but) today he was brilliant, economical with the ball," he added.

It was Jadeja's brilliance with the bat that helped India rebuild after a shocking top-order collapse. His 116-run partnership with MS Dhoni for the seventh wicket kept India's hopes alive.

But both got out trying to up the ante and India didn't recover from that point and eventually lost the match by 18 runs.

Before India's league match against Bangladesh, Sanjay Manjrekar had said, "I am not a big fan of bits and pieces players which Jadeja is at this point of his career in 50-over cricket. In Test matches, he is a pure bowler. But in 50-over cricket, I would rather have a batsman and a spinner."

Ravindra Jadeja did not take this criticism well and asked the former India player to learn to respect people who have achieved something.

Jadeja took to Twitter to express his anger, "Still i have played twice the number of matches you have played and i m still playing. Learn to respect ppl who have achieved.i have heard enough of your verbal diarrhoea.@sanjaymanjrekar".