Miguel Cummins faced 45 deliveries but could not get off the mark on Day 3 of the first Test against India on Saturday. 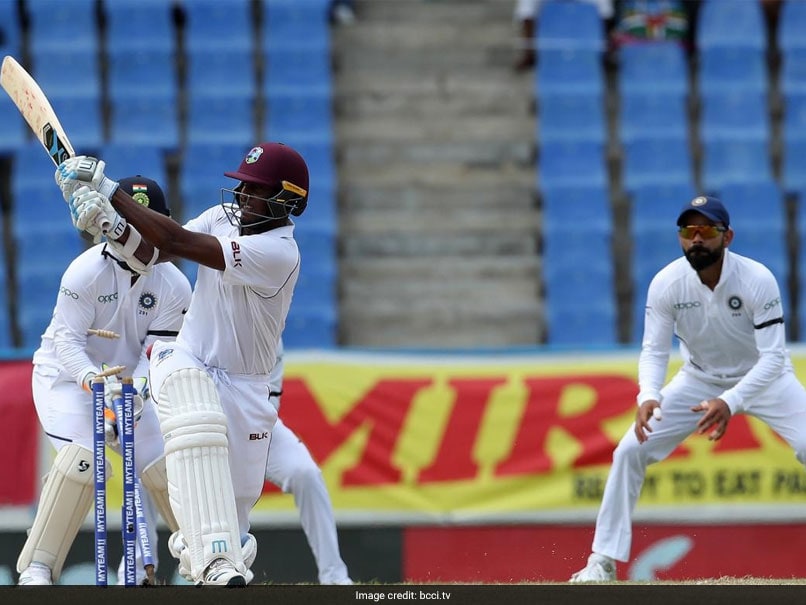 West Indies tailender Miguel Cummins scored a duck after withstanding 45 deliveries and spending 95 minutes against India on Day 3 of the first Test to register an unwanted record. He was also the last wicket to fall for the West Indies in the first innings as the hosts managed to put 222 runs on board in the first innings, conceding a 75-run lead to India. It was the second longest innings in Test cricket for someone being dismissed without scoring. That dubious record is still held by New Zealander Geoff Allott, who survived for 101 minutes before falling for nought against South Africa in Auckland in 1999.

India's bowlers spent most of the morning session at the Sir Vivian Richards Stadium labouring to claim the final two wickets of the home side's first innings as West Indies captain Jason Holder found sturdy support from Cummins in putting on 41 for the ninth wicket before they were eventually dismissed for 222.

Having slipped from 174 for five to 179 for eight late on day two courtesy of the persistent Ishant Sharma, India would have been expecting to finish the job swiftly at the start of play.

However, they did not count on the defiance of Cummins, who hung around with Holder for an hour-and-a-half without getting off the mark.

Attempting to get his first runs though, the fast-medium bowler, who bats left-handed, was bowled having a swing at Ravindra Jadeja to give the left-arm spinner his second wicket of the innings.

Seeking to work their team into a dominant position by the end of the day, the Indian opening pair of KL Rahul and Mayank Agarwal will resume in the afternoon session on 14 without loss in their second innings, an overall lead of 89 runs.

West Indies Cricket Team West Indies vs India 2019 Miguel Cummins Cricket
Get the latest updates on IPL Auction 2023 and check out  IPL 2023 and Live Cricket Score. Like us on Facebook or follow us on Twitter for more sports updates. You can also download the NDTV Cricket app for Android or iOS.