Navdeep Saini starred for India in his debut match against the West Indies, picking up three wickets for just 17 runs in four overs. 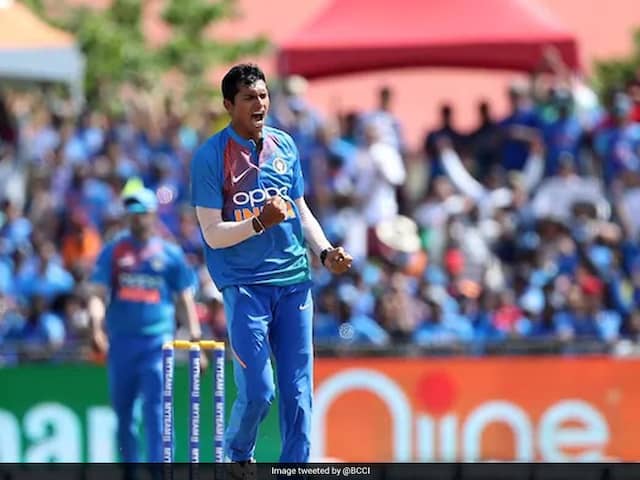 Navdeep Saini starred for India in his debut match against the West Indies.© Twitter

Navdeep Saini starred for India in his debut match against the West Indies, picking up three wickets for just 17 runs in four overs. Navdeep Saini's performance, which won him the Man of the Match award, impressed leg-spinner Amit Mishra. Speaking on the sidelines of a promotional event in New Delhi, Amit Mishra praised Navdeep Saini for grabbing the opportunity he has been given. Amit Mishra added that Navdeep Saini is a "great talent" and needs to be "groomed properly".

"Navdeep Saini is a great talent. He needs to be groomed properly. He is performing well for the past one year in and has also been consistent in the IPL. He has grabbed the opportunity he has been given," Mishra told reporters.

The Delhi Capitals player also said that India must look to create a pool of three-four more fast bowlers like Saini.

The leg-spinner said the the current Indian squad, comprising a lot of youngsters, is performing well and whatever hiccups they are facing is because of the lack of experience.

"There are a lot of youngsters in the team they will gain experience once they play. I dont think we will face any problems in the long run. The little problems that we are facing is because they don't have the experience."

Asked about if India needs a spinner like Anil Kumble as coach after former India spinner Sunil Joshi applied for the national team bowling coach's job, Mishra said it depends on the need of the players.

"You should ask the management and senior players if they need it. If they believe they need a spinner as a coach then the management will look into it. We have no dearth of coaches or spinners in the country," he said.

India Cricket Team West Indies vs India 2019 Cricket
Get the latest Cricket news, check out the India cricket schedule, Cricket live score . Like us on Facebook or follow us on Twitter for more sports updates. You can also download the NDTV Cricket app for Android or iOS.