Ugly scenes followed the Under-19 World Cup final as Bangladesh players rushed to the ground andwere aggressive towards their Indian counterparts. 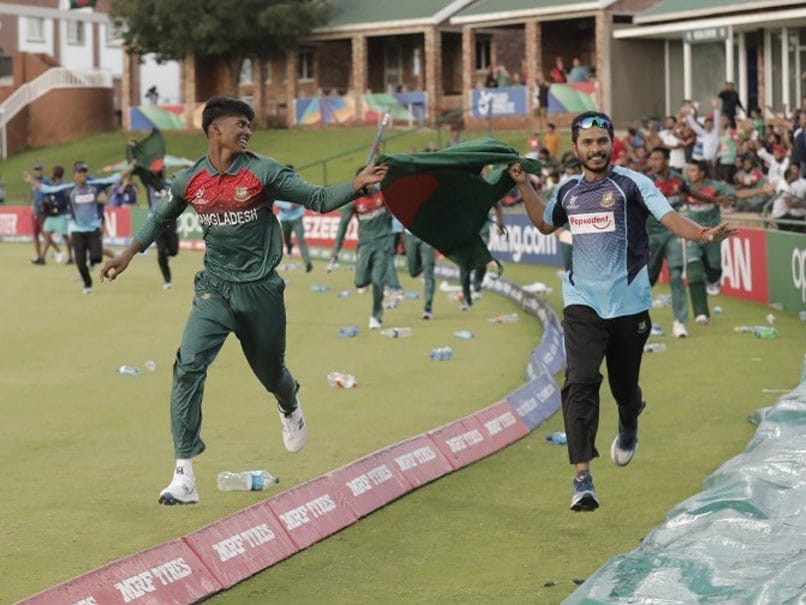 Bangladesh won their maiden Under-19 World Cup on Sunday.© AFP

India's under-19 cricket team manager Anil Patel says the ICC has taken a serious view of the aggressive celebrations by Bangladesh players after their World Cup triumph and will be reviewing the footage of the final game's "last few minutes" in Potchefstroom. Some Bangladeshi players got carried away while celebrating their historic three-wicket win over India in the final on Sunday. While their captain Akbar Ali apologised for the "unfortunate incident", his Indian counterpart Priyam Garg said their reaction was "bad".

"Everybody was in a shock, absolutely, but we don't know what happened exactly. The ICC officials are going to watch the footage of the last few minutes and they are going to let us know," he said.

Even when the match was on, the Bangladesh players were overly aggressive while fielding and their lead pacer Shoriful Islam sledged the Indian batsmen after every delivery.

As soon as the match ended, it became tense with Bangladeshi players rushing to the ground and displaying aggressive body language. The two teams nearly came to blows before the situation was defused by the coaching staff and on-field officials.

Patel claimed that match referee Graeme Labrooy met him and expressed regret at what transpired on the field.

"The referee came to me. He was sorry about the incident. He clarified the ICC is going to take very seriously what has happened during the match and the last session. They are going to witness the footage and they will tell us in the morning (Monday)."

Bangladesh U19 Cricket
Get the latest updates on IND vs NZ 2021, check out the Schedule and Live Score . Like us on Facebook or follow us on Twitter for more sports updates. You can also download the NDTV Cricket app for Android or iOS.