Novak Djokovic was trailing 7-6, 2-0 and felt he had no option but to call it quits as the pain, from an injury that has troubled him for more than a year, began to increase. 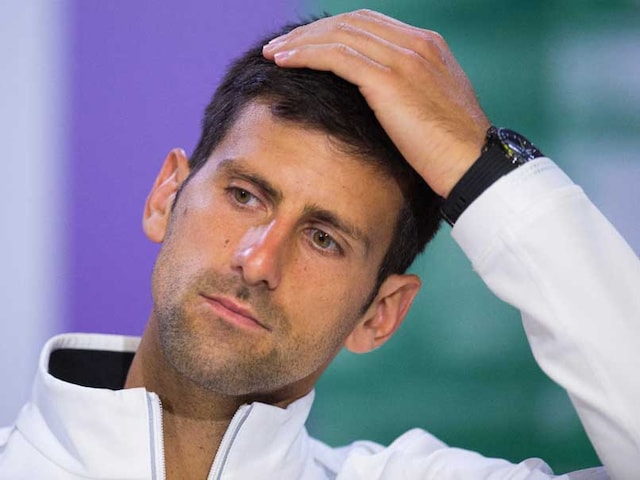 Novak Djokovic admits a long break is on the cards after an elbow injury forced him to retire from his Wimbledon quarter-final against Tomas Berdych. Djokovic's miserable 12 months hit a fresh low on Wednesday when a right elbow problem curtailed his bid to win Wimbledon for a fourth time. The 30-year-old Serb was trailing 7-6 (7/2), 2-0 and felt he had no option but to call it quits as the pain, from an injury that has troubled him for more than a year, began to increase.

"There is a possibility that they will propose surgery, but I don't think that is good," Djokovic told Serbian media.

"To go be cut in surgery or to poison myself with pills.... none of the solutions is good.

"A logical conclusion is that a kind of a rest and a longer break is a logical solution. Maybe a longer rest is necessary, not only because of the injury but for my mind as well.

"During my entire career I have followed a school schedule, I have never been reprimanded, maybe I will skip the next semester."

Djokovic, who has also struggled with a shoulder issue, had spoken to medical experts about the elbow problem before Wimbledon and was told surgery was an option.

Asked what he would do to finally resolve the nagging injury, Djokovic had admitted he wouldn't rule out an operation.

"The specialists that I've talked with, they haven't been really too clear, mentioning also surgery, mentioning different options," he said.

"Nobody was very clear in what needs to be done. As long as it kind of comes and goes, it's fine.

"But obviously, adding up, maybe it worked for seven, eight, ten months, but now the next seven months is not working that great.

"Obviously it's adding up more and more. The more I play, the worse it gets. Yeah, I guess the break is something that I will have to consider right now."

With the US Open just six weeks away at the culmination of the American hard-court swing, Djokovic doesn't have long to return to full fitness.

Since winning the French Open last year to complete his career Grand Slam, Djokovic has failed to claim another major title.

He crashed out of the Australian Open in the second round and the French Open in the quarter-finals.

With world number one Andy Murray losing against Sam Querrey earlier on Wednesday, Djokovic knew he would have regained top spot in the rankings if he won Wimbledon.

That honour will have to wait for now and, with Murray hobbled by a long-term hip injury against Querrey, Djokovic conceded the two rivals could be paying the price for their gruelling battle for the top ranking last year.

"Could be. We both had a very long, very tough year, a lot of matches, a lot of emotions, a lot of things in play," he said.

"Our bodies have taken a lot physically. So, I mean, as an athlete, one way or another, at a certain stage of your career, you're going to experience these kind of things. "Injuries are part of this sport, unfortunately.

Professional tennis is getting very physical in the last couple of years.

"It's not easy to kind of play on the highest level throughout the entire season, then be able to do that over and over again every season, and then stay healthy."

The injury was especially frustrating for the 12-time Grand Slam winner as he felt he was finally beginning to play his best tennis after a turbulent period.

"For an athlete, it's really hard to swallow when you have to retire, especially when you're playing well," Djokovic said.

"I was playing really well, probably the best tennis I've played in the last 10 months or so.

"It's just unfortunate. It takes some time to understand why this happened and to learn from it."

Comments
Topics mentioned in this article
Novak Djokovic Tomas Berdych Roger Federer Tennis
Get the latest Cricket news, check out the India cricket schedule, Cricket live score . Like us on Facebook or follow us on Twitter for more sports updates. You can also download the NDTV Cricket app for Android or iOS.