It was the first meeting between the two Williams sisters since they clashed in the final of the 2017 Australian Open. 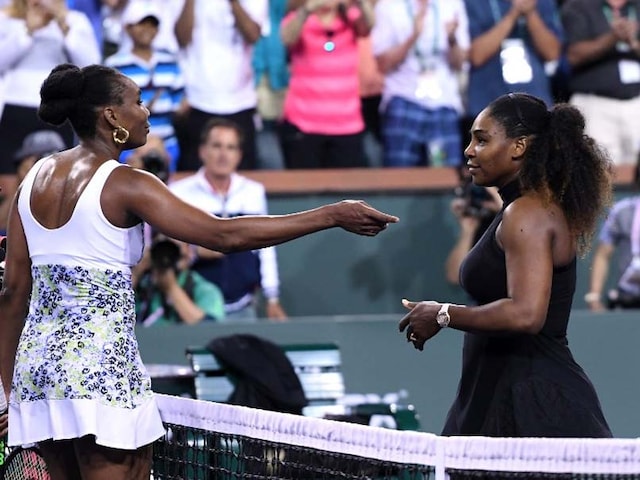 Venus Williams closed out the 29th career meeting between the two sisters on her 2nd match point.© AFP

Serena Williams' return to tournament tennis came to an abrupt end here Monday as she crashed out of Indian Wells with a 6-3, 6-4 loss to her sister Venus. Venus closed out the 29th career meeting between the two on her second match point as Serena sailed a forehand long to end the third round match. The 10th seeded Venus moves on to the round of 16 where she will face either Anastasija Sevastova or 12th seeded Julia Georges. It was the first meeting between the two sisters since they clashed in the final of the 2017 Australian Open, which Serena won before taking a 15-month hiatus due to her pregnancy.

It is rare for the Williams sisters to play this early in a tournament. It is the earliest they have faced each other since their first encounter at the Australian Open in 1998.

The sisters arrived outside the stadium together on a golf cart then walked through the tunnel with Serena entering the court first with many in the crowd standing and cheering.

Serena is still shaking off the rust after the long layoff as she hit four aces but had her serve broken four times.

This was their first encounter with Venus as an aunt and Serena as a new mother after giving birth to her baby daughter, Alexis Olympia, on September 1.

Venus's victory also comes 17 years after an ugly booing incident led to a 14-year boycott of the tournament by the sisters.

But for some it brought closure to the once testy relationship between Indian Wells and the sisters who hail from the Los Angeles suburb of Compton.

Comments
Topics mentioned in this article
Venus Williams Serena Williams Tennis
Get the latest Cricket news, check out the India cricket schedule, Cricket live score . Like us on Facebook or follow us on Twitter for more sports updates. You can also download the NDTV Cricket app for Android or iOS.