While the world number two remains in a tight battle with Rafael Nadal and Roger Federer in the race for most Grand Slam titles won, Novak Djokovic believes what currently drives him in the sport is something deeper than that. 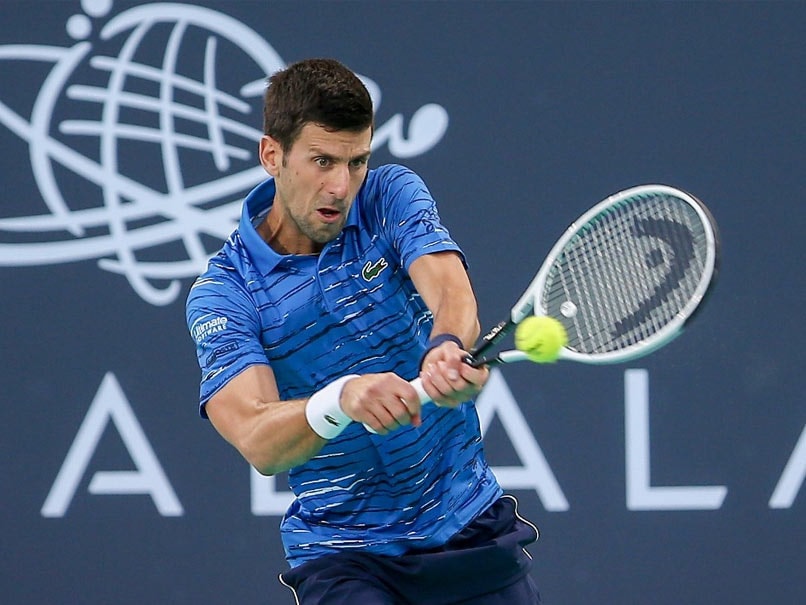 Novak Djokovic will begin his 2020 season by representing Serbia in the ATP Cup in Australia.© AFP

Novak Djokovic says the main source of his motivation at this stage of his career is securing a lasting legacy rather than simply trying to win tennis matches and trophies. For nearly two years, from mid-2016 until mid-2018, the 32-year-old Serb had admittedly struggled with motivation after pulling off the historic feat of winning four Grand Slams in a row -- a first in men's tennis since 1969. Djokovic recaptured his spark and has since added a quartet of majors to his overall tally, which now stands at 16.

While the world number two remains in a tight battle with Rafael Nadal and Roger Federer in the race for most Grand Slam titles won, Djokovic believes what currently drives him in the sport is something deeper than that.

"You need to constantly give yourself fuel from the source, whatever the source is," Djokovic said at the Mubadala World Tennis Championship exhibition event in Abu Dhabi, where he secured third place with victory over Karen Khachanov on Saturday.

"I think it's always about finding that purpose, and the reason, the meaning of actually playing. For me, especially in the last couple of years, it's not only about winning a tennis match or a trophy.

Federer holds the men's all-time record of most majors won, with 20, and Nadal is breathing down his neck with a total of 19.

Djokovic is younger than both of them though, and has a shot at closing the gap on his two rivals.

"That's a goal," said Djokovic, when asked if he is fuelled by breaking records.

"I'm motivated by breaking my own records and moving my own boundaries and that"s something that motivates me to compete.

"I do love to play tennis so I do like to be on the practice court. But competitive tennis is different. In order to compete to be a professional tennis player and to compete at the highest level, you really need goals, daily goals, monthly goals, yearly goals.

"So I do have them, as everyone else. Of course I'm aware of the privilege that I have to fight for history and to be able to possibly achieve even greater things and that's something that drives me of course, alongside other things."

Djokovic will begin his 2020 season by representing Serbia in the ATP Cup in Australia.

He remains midway through his pre-season preparations, and leaves Abu Dhabi with one loss, to Stefanos Tsitsipas, and one win over Khachanov.

"I got what I came here for, two good matches," he said on Saturday.

Meanwhile, Khachanov is hoping to find consistency in the new season following a see-saw 2019.

The Russian former top-10 player has added Swedish coach Fredrik Rosengren to his team, to work alongside Vedran Martic.

The 23-year-old is also a new dad, having welcomed his son David with his wife, Veronika, three months ago.

"Fatherhood is treating me very well. I think you become more mature because you have responsibility not only for yourself, but for the whole family, so that's one of the biggest steps," said the 17th-ranked player.

Novak Djokovic Roger Federer Rafael Nadal Tennis
Get the latest updates on ICC T20 Worldcup 2022 and CWG 2022 check out the Schedule, Live Score and Medals Tally. Like us on Facebook or follow us on Twitter for more sports updates. You can also download the NDTV Cricket app for Android or iOS.