Novak Djokovic and Rafael Nadal put their immediate aims to one side and played a practice session in Paris. 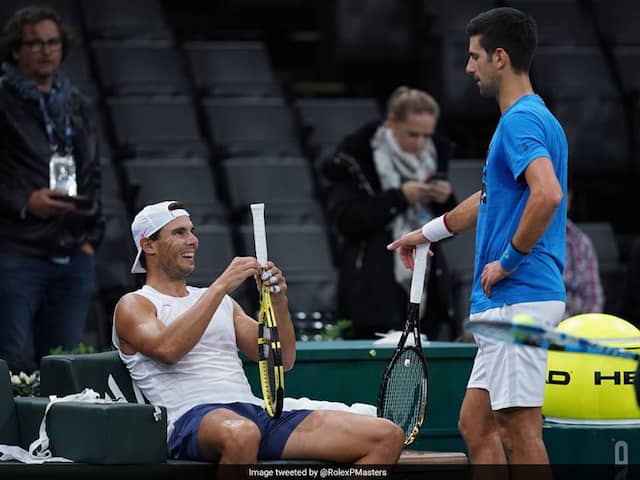 Novak Djokovic and Rafael Nadal were seen practising together ahead of this week's Paris Masters.© Paris Masters/Twitter

Novak Djokovic enjoyed a "fun", but rare, practice session with Rafael Nadal ahead of this week's Paris Masters as the old rivals prepare to battle for the year-end world number one spot. The Serbian star will be usurped at the top of the rankings by Nadal next Monday no matter what happens in the French capital, while the Spaniard can also seal year-end supremacy by winning his first title at Bercy. Djokovic is bidding to equal Pete Sampras' record by finishing the year as the world's top-ranked player for a sixth time.

The pair put their immediate aims to one side and played a practice session in Paris, shortly after facing off in an exhibition charity match in Kazakhstan.

"It was a lot of fun. It was very intense and competitive, as you can imagine, obviously, but in a very respectful way," said the 32-year-old Djokovic on Monday.

"It was actually very unusual because we haven't practised for years.

"It was strange because, when I see him across the net, that means I'm playing him, probably semi-finals or finals of a big event, but this time it was a practice session. But nevertheless, the intensity was like a match."

If Nadal fails to secure the year-end number one ranking this week, it will go down to the ATP Tour Finals in London, where Djokovic will be looking to draw level with Roger Federer on a record six titles.

The 16-time Grand Slam champion has also won the Paris Masters four times, while Nadal is yet to take either of the late-season events and has only claimed two of his 84 ATP titles indoors.

"He's in a much better position, but I hope I can do well in this tournament," said Djokovic, who suffered a surprise final loss to Russian Karen Khachanov 12 months ago.

"I've historically played really well indoors in Paris and also London, but it doesn't depend on me.

"I cannot really focus really too much on what he is doing or other players. I'll try to kind of get the most out of my performances and see where it takes me.

"In order to have a chance for year-end No. 1, I have to win all of my matches till the end of the season."

Nadal, who claimed his 19th Grand Slam title last month with an epic US Open final win over Daniil Medvedev, has been the year-end world number one on four occasions.

The 33-year-old will face either Norwegian Casper Ruud or home wildcard Adrian Mannarino in his second-round opener, while Djokovic takes on either his compatriot Dusan Lajovic or lucky loser Corentin Moutet.

Novak Djokovic Rafael Nadal Roger Federer Tennis
Get the latest Cricket news, check out the India cricket schedule, Cricket live score . Like us on Facebook or follow us on Twitter for more sports updates. You can also download the NDTV Cricket app for Android or iOS.