Murray River Open: Nick Kyrgios, who has a history on-court blow-ups, is playing his first tournament in a year after a wrist injury and then the coronavirus pandemic brought his 2020 season to a halt. 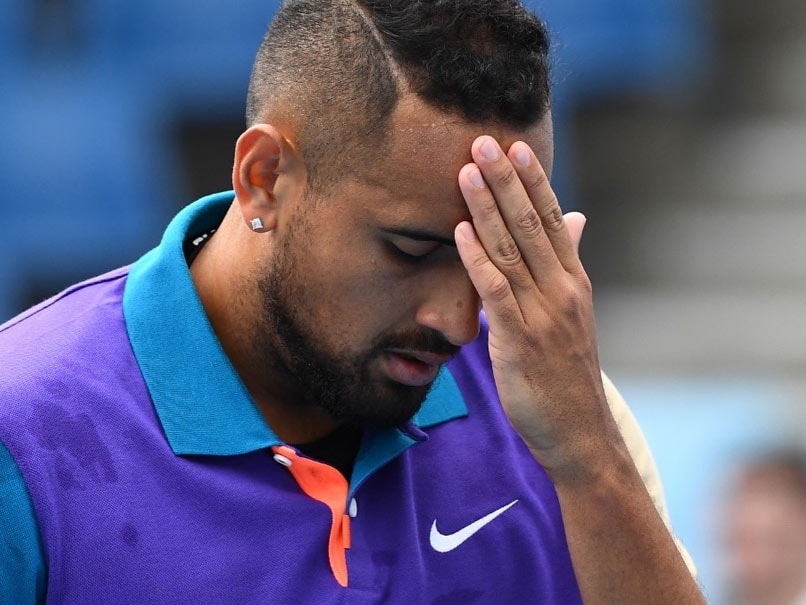 Australia's Nick Kyrgios plunged into a trademark meltdown Wednesday, holding up play for more than five minutes as he argued over a time violation while serving at the Murray River Open. The combustible Kyrgios was leading countryman Harry Bourchier 6-2, 5-5 and serving at 40-30 when he took issue with the decision, walking to his chair and declaring: "I'm not playing, sorry mate." Kyrgios, who eventually recovered to win the match, was unhappy that Spanish umpire Nacho Forcadelle called the violation, claiming he had already begun his service motion.

"It's like you're just doing it to be funny," he fumed at the umpire. "Do you think you're funny?"

He demanded the match supervisor be called, telling the chair official: "When will you guys realise it's not about you. You're just an extra for all of us."

After arguing further with the supervisor, he finally agreed to play after being assured he wouldn't be fined.

When Bourchier suggested they get on with the game Kyrgios responded: "I want to talk about it now. I've lost enough money to these peanuts."

Kyrgios gathered his composure to win the match 6-2, 7-6 (9/7) and afterwards insisted: "I just like playing by the rules.

"And I just didn't want to play until I was sure I wasn't going to get fined because the ATP are pretty rough all the time, they fine me so much money."

Kyrgios, who has a history on-court blow-ups, is playing his first tournament in a year after a wrist injury and then the coronavirus pandemic brought his 2020 season to a halt.

His win set up a clash next against Croat Borna Coric.

Earlier, three-time Grand Slam champion Stan Wawrinka clawed past Mikhail Kukushkin to keep alive his hopes of a first title since 2017 as he battles back from a case of Covid-19.

The Swiss 35-year-old, who won the first of his three Grand Slam titles in Melbourne in 2014, tested positive to the virus just before Christmas, upsetting his preparations.

Seeded one at the Murray River Open and in his first match of the season, he lost the opening set against his Kazakh opponent but kept his composure to fight back and win 4-6, 6-3, 6-1.

"It felt okay. I'm happy to get the win and I'm ready to start a new tournament, a new year, especially after a few months out," said Wawrinka, who last won an ATP title in Geneva more than three years ago.

He faces Australian Alex Bolt in the third round.

Britain's Dan Evans, who had the best season of his career in 2020, climbing to a career-high 28, also stayed in the title hunt, as did Australian James Duckworth, who upset French seventh seed Ugo Humbert.

Teenager Jannik Sinner, who in November became the youngest ATP champion in 12 years when he won in Sofia, was another winner on Wednesday.

Playing his first match since claiming the silverware in Bulgaria, the 19-year-old Italian swept past Australia's Aleksandar Vukic 6-2, 6-4 in the Great Ocean Road Open, being played concurrently at Melbourne Park.

Comments
Topics mentioned in this article
Nick Kyrgios Stanislas Wawrinka Tennis
Get the latest updates on IPL 2021, check out the IPL 2021 Schedule and Indian Premier League Live Score . Like us on Facebook or follow us on Twitter for more sports updates. You can also download the NDTV Cricket app for Android or iOS.