Nick Kyrgios was quick to have his say after Novak Djokovic was sensationally disqualified from the US Open for hitting a woman line judge in the throat with a ball bashed away in disgust after losing his serve. 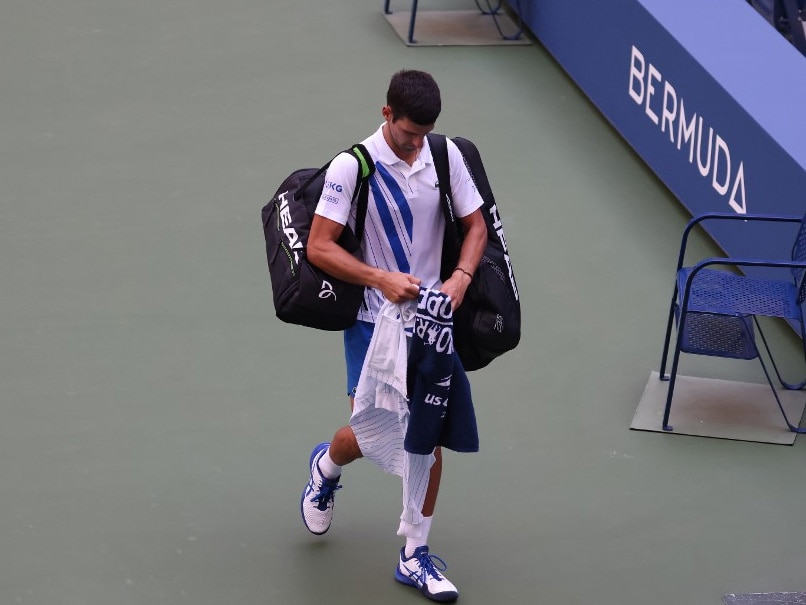 The USTA said Novak Djokovic would lose all ranking points and prize money from the tournament.© AFP

Nick Kyrgios opened a cheeky Twitter poll Monday asking how many years he would be banned if he had hit an official with a ball, after 17-time Grand Slam winner Novak Djokovic's default at the US Open. The Australian has waged a running battle with the Serb in recent months over his ill-fated Adria Tour exhibition series, lashing out at the world number one's "stupidity" after several players contracted coronavirus. And he was quick to have his say after Djokovic was sensationally disqualified from the US Open for hitting a woman line judge in the throat with a ball bashed away in disgust after losing his serve.

The combustible Kyrgios, who was hit with a suspended 16-week ban last year for a series of on-court outbursts, jumped onto social media to ask his followers what would happen if he had hit the line judge.

"Swap me for jokers incident," he said, using Djokovic's nickname.

"'Accidentally hitting the ball kid in the throat.' How many years would I be banned for?" asked the Australian.

The options given were five, 10 or 20 years with the poll attracting more than 60,000 answers in its first hour, with the majority voting for 20 years.

The United States Tennis Association said Djokovic, who apologised, would lose all ranking points and prize money from the tournament.

While most took the Kyrgios's tweet as a light-hearted dig, not everyone was impressed.

"Slight difference: you did much worse," noted one user, while another wrote: "Same penalty as Djoko. Stop victimising yourself, get on with it."

The ATP opened a probe into Nick Kyrgios last year following an explosive meltdown at the Cincinnati Masters where he smashed two racquets and launched into an abusive tirade at the chair umpire before appearing to spit at the official.

He was fined US$113,000 for ball abuse, leaving the court without permission, an audible obscenity and unsportsmanlike conduct during his loss to Russia's Karen Khachanov.

While Kyrgios was penalised for the Cincinnati outbursts, he avoided further punishment for calling the ATP "pretty corrupt" during the 2019 US Open after he "clarified" his comment.

Kyrgios, ranked just 40 but a big drawcard, opted to remain in Canberra and not play this year's US Open due to the pandemic.

Novak Djokovic Nick Kyrgios Karen Khachanov Tennis
Get the latest updates on IPL Auction 2023 and check out  IPL 2023 and Live Cricket Score. Like us on Facebook or follow us on Twitter for more sports updates. You can also download the NDTV Cricket app for Android or iOS.