US Open 2020: World No. 1 Novak Djokovic Disqualified From The Tournament After Hitting Official With The Ball In Round Of 16

Novak Djokovic was sensationally disqualified from the US Open on Sunday after striking a line judge with a ball during his last-16 match. 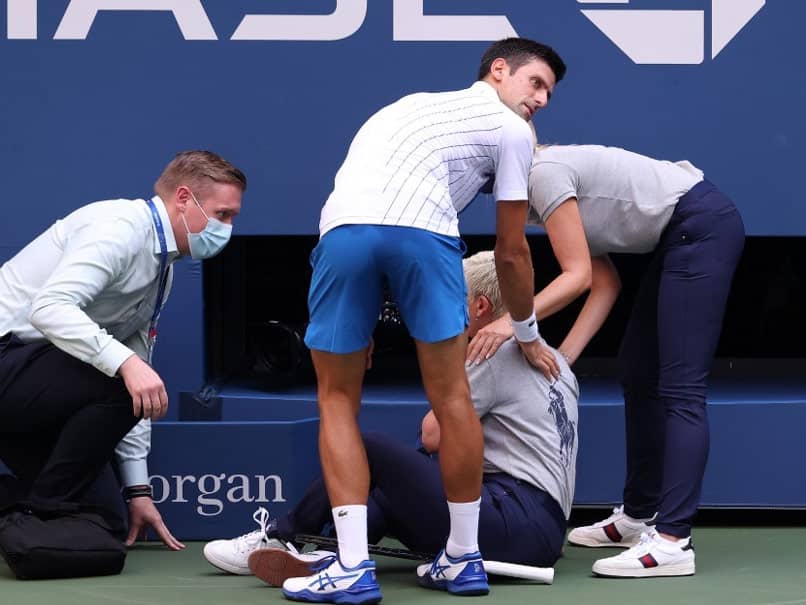 Novak Djokovic rushed over to check if the line judge was okay after accidentally hitting her.© AFP

Novak Djokovic was sensationally disqualified from the US Open on Sunday after striking a lines official with a ball during his last-16 match. The world number one went 5-6 down in the first set to Spain's Pablo Carreno Busta when he hit a ball in the direction of the female official. It struck her in the throat and she could be heard gasping. Djokovic rushed over to check that she was okay and after a few minutes she got up and walked off the court. Following around ten minutes of discussions with the tournament referee, the umpire declared that Carreno Busta had won by default. Djokovic shook hands with Carreno Busta before leaving the court.

The Serbian star is one of only a handful of players to be disqualified from a men's singles tournament at a Grand Slam since John McEnroe was infamously tossed from the Australian Open in 1990.

Djokovic had been chasing an 18th Grand Slam title at the Billie Jean King US National Tennis Center.

He was hoping to close the gap on Roger Federer and Rafael Nadal, both absent from the tournament, in the race for the all-time men's Slam singles title record.

Earlier, American Jennifer Brady led a day of upsets in the women's draw.

Brady, the 28th seed, stunned three-time Grand Slam winner Angelique Kerber of Germany to reach a Grand Slam quarter-final for the first time in her career.

"It's awesome. Hopefully I keep going," she told reporters.

Brady, whose previous best appearances at Slams were fourth-round finishes at the Australian and US Opens three years ago, credited her run to becoming fitter.

Brady will play Yulia Putintseva for a spot in the last four after the Kazakhstan 23rd seed stunned eighth seed Petra Martic of Croatia elsewhere on Sunday.

Putintseva displayed a range of exquisitely placed dropshots as she sent Martic tumbling out 6-3, 2-6, 6-4 in 2hr 37 min inside Arthur Ashe Stadium.

In the men's draw Sunday, fifth seed Alexander Zverev became the first German to reach the US Open last eight since Tommy Haas in 2007.