Novak Djokovic won points on 87 percent of his successful first serves and never committed a double fault in the roughly 90-minute contest. 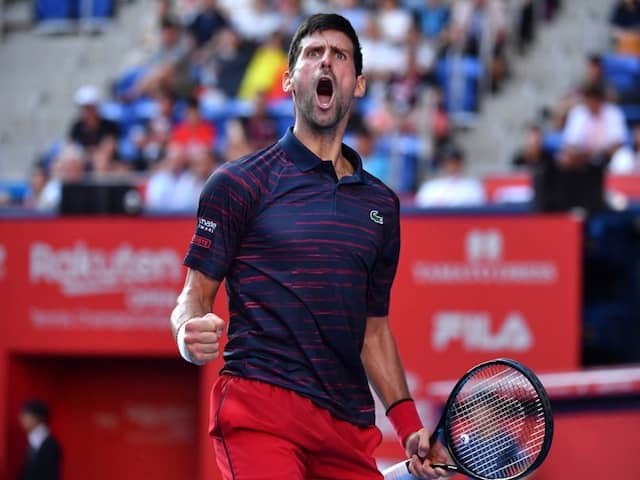 World number one Novak Djokovic on Saturday cruised into the Japan Open final, thrashing David Goffin 6-3, 6-4. In the final, Djokovic will face Australian qualifier John Millman, who squeezed past American opponent Reilly Opelka 6-3, 7-6 (7/4). The Serbian star dominated his semi-final, starting strong by winning the first three games, picking up an early break while fending off fierce attempts by the Belgian to fight back.

Djokovic again picked up an early break in the second set, and survived all the four break points through the match.

"I think we both served extremely well and precise, not too much chance for returners," he said in a press conference. "Even though it was a two-set win, the quality of tennis was quite high."

Djokovic won points on 87 percent of his successful first serves and never committed a double fault in the roughly 90-minute contest.

Goffin fought bravely, but Djokovic kept up the pressure with deep shots and quick footwork to fend off any threat.

"I trained with ninjas before this tournament," Djokovic quipped, when asked about his apparent omnipresence on the court, during a post-match interview in front of cheering Japanese fans.

"This has been a wonderful week for me on and off the court," he said. "Hopefully I will be able to crown this week with a trophy tomorrow."

In the final, he will face the 80th-ranked Millman, who is making his first career appearance in the final of an ATP 500 event.

Millman predicted "a lot of baseline exchanges" with "one of the greatest players" of all time.

"It will be a physical battle. I will probably be the underdog, coming through qualifying. I know back home in Australia, we all like underdogs," he said.

"I hope to bring my best tennis, a physical brand of tennis, and really just give it all for one more match. That's all I want to do."

David Goffin Tennis
Get the latest Cricket news, check out the India cricket schedule, Cricket live score . Like us on Facebook or follow us on Twitter for more sports updates. You can also download the NDTV Cricket app for Android or iOS.