Novak Djokovic stepped up a gear at the Japan Open, fending off a tough challenge from Japanese wild card Go Soeda. 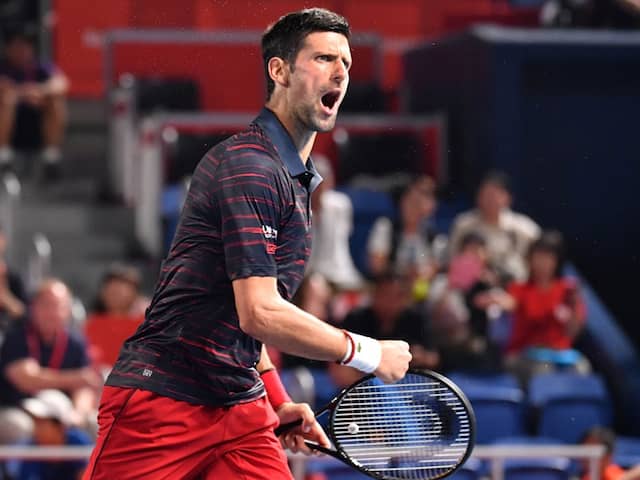 Novak Djokovic stepped up a gear at the Japan Open.© AFP

Novak Djokovic stepped up a gear at the Japan Open on Wednesday, fending off a tough challenge from Japanese wild card Go Soeda 6-3, 7-5 to advance to the quarterfinals. The world number one said he had no problems with the injured shoulder which forced him out of the US Open as he looked to face French fifth-seed Lucas Pouille at the Ariake Colosseum, a venue for the Tokyo 2020 Olympics. Djokovic was cruising to a victory until late in the second set when the 35-year-old Japanese player put up a tenacious fight as the Serb began missing many of his first serves, reducing his 5-3 lead to 5-5.

But Djokovic snapped back in form and took the final two games without giving a single point away, ending the match in just over 90 minutes.

"Obviously, I was pleased to get that done in two (sets)," Djokovic said. "We must give credit to Go Soeda, who played a really good match, fought hard, made me work for my win today.

"For my side, I am really pleased. Probably I played even on a higher level than the first round. So the game is going in the right direction for sure," he said.

"I played now three days in a row," he said. "Everything is fine."

Elsewhere in the tournament, third-seed David Goffin of Belgium came from behind in a dramatic first-round victory against Spanish player Pablo Carreno Busta 1-6, 7-6(8), 6-0.

Their gruelling battle, the first match of the day, lasted over two hours in blazing heat, as Goffin clung on to the match to take the second set that ended with a dramatic tie-break.

But Carreno Busta gave up the third set.

"It was a great fight. Such a tough opponent," said Goffin, who will now face Denis Shapovalov of Canada.

"In the end, I am happy to go to the second round," Goffin said.

Novak Djokovic Lucas Pouille Tennis
Get the latest Cricket news, check out the India cricket schedule, Cricket live score . Like us on Facebook or follow us on Twitter for more sports updates. You can also download the NDTV Cricket app for Android or iOS.