Rafael Nadal was forced to withdraw from his US Open semi-final against Juan Martin del Potro in early September with a knee injury. 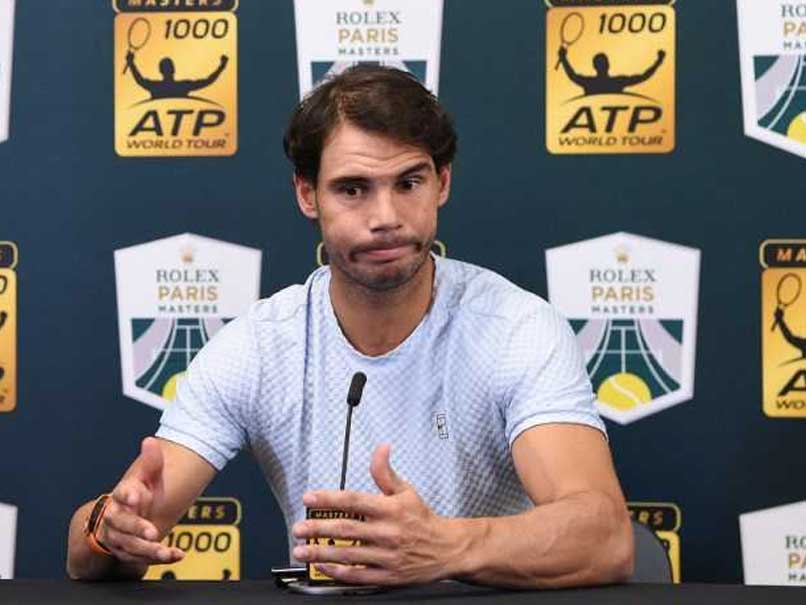 Rafael Nadal announced his withdrawal from Paris Masters in a press conference.© AFP

Failing to recover from an injury, Rafael Nadal on Wednesday pulled out of the Paris Masters guaranteeing Novak Djokovic's return to world number one spot. Ahead of the start of the tournament, Nadal, in a press conference, revealed that he has been recommended by the doctors not to play. "My abdominal muscles haven't felt good for the past few days, especially on serve, doctors recommended that I didn't play," said Nadal. Djokovic, the current Wimbledon and US Open champion, now becomes the first player to start the season outside the top 20 and end up the top of the ATP rankings since Marat Safin in 2000.

The 14-time Grand Slam champion had begun his pursuit of the top spot in encouraging fashion with a 7-5, 6-1 defeat of Joao Sousa on Tuesday, his 19th consecutive win.

For Nadal, it means delaying his long awaited comeback from injury which has kept him sidelined since the US Open.

Nadal was forced to withdraw from his US Open semi-final against Juan Martin del Potro in early September with a knee injury.

The problem sidelined him for Spain's Davis Cup semi-final against France, and also from tournaments in Beijing and Shanghai.

"It's been a difficult year for me in terms of injuries, and so I'd prefer to avoid doing anything drastic," he told the media minutes before his intended match against compatriot Fernando Verdasco.

"It wouldn't have been good for me nor anyone to return to the court knowing that I wouldn't be able to play my best.

During his enforced time out Nadal joined in the clean-up operation after flash floods killed 12 people on the Spanish holiday island of Majorca where he lives.

After Paris the ATP tour's eight top-ranked players congregate in London from November 11 for the season's Finals.

The 32-year-old Nadal has enjoyed a successful year, clinching his 17th Grand Slam title by winning an 11th French Open in June, after triumphs in Monte Carlo, Barcelona and Rome.

But it is Djokovic who will be top dog when the latest ATP rankings appear on Monday, irrespective of his fate in the French capital this week.

Despite the blow, the tournament organisers will be relieved to see Roger Federer making his first appearance at the competition since 2015.

The Swiss great start his quests for his 100th ATP title in the last 16 on Thursday after his Wednesday rival Milos Raonic withdrew through injury.