Ashleigh Barty leads Australia's hopes of reaching a first Fed Cup final since 1993 when they face 2017 runners up Belarus in Brisbane. 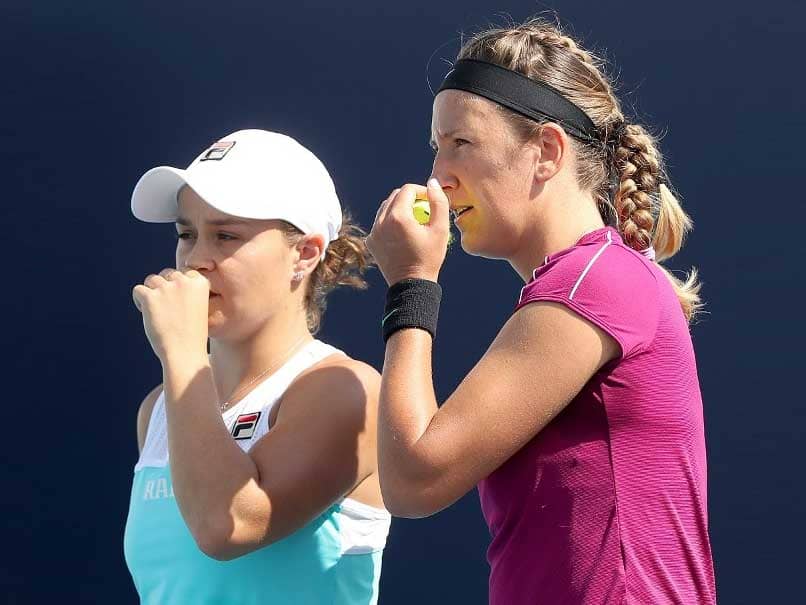 Ashleigh Barty, Victoria Azarenka have been selected to meet each other in the second singles rubber.© AFP

Ashleigh Barty will be overjoyed when doubles partner and two-time major winner Victoria Azarenka returns to the peak of her powers but hopes it won't be this weekend when Australia and Belarus clash for a place in the Fed Cup final. Barty and Azarenka teamed up this season, making the doubles semi-finals at the prestigious Miami Open just days before the Australian clinched the singles title, a breakthrough which propelled her into the world's top 10. Now Barty leads Australia's hopes of reaching a first Fed Cup final since 1993 when they face 2017 runners up Belarus in Brisbane on Saturday and Sunday.

And the pair have been selected to meet each other in the second singles rubber, with Azarenka preferred to her higher-ranked teammate Aliaksandra Sasnovich.

Australia also opted for experience, with former US Open champion Samantha Stosur, who made her Fed Cup debut back in 2003, a surprise pick to open the tie, rather than Daria Gavrilova, against world number 10 Aryna Sabalenka.

"She's obviously a player who loves the pressure situation," Barty said of 29-year-old Azarenka, ranked 61, who is no stranger to success "Down Under" having won the 2012 and 2013 Australian Open titles.

"The tighter it gets, the better she gets. I'm sure it won't be long before she's back to her very best once again."

The two teams are evenly matched on paper but Barty, who boasts a Fed Cup record of 14 wins and just two losses, is confident seven-time champions Australia can end their long wait to make another final.

"I feel like we have a really unique team at the moment and it's a bloody good one," she said. "I think we've got more than a good chance of winning."

In the weekend's other semi-final, Simona Halep eyes taking another step closer to adding a maiden Fed Cup winner's medal to her 2018 French Open crown when Romania face France in Rouen.

Romania have equalled their best Fed Cup showing, having also made it to the semi-finals in 1973.

Having knocked out defending champions Czech Republic in the quarter-finals, world number two Halep is desperate to guide Romania into a first final -- and has been using manager Virginia Ruzici, who played in the 1973 team, as inspiration.

"Virginia played in that semi-final and I asked her about that experience and she told me," Halep, who has a 20-9 record in the competition, told fedcup.com.

"She was pretty relaxed in the past and not so stressed like us now."

Romania edged the Czechs 3-2 in an epic quarter-final at Ostrava secured by a three-set win in the decisive doubles by Irina-Camelia Begu and Monica Niculescu over Barbora Krejcikova and Katerina Siniakova.

"It was the best moment and I was jumping around as I was so happy," recalled Halep, who will likely share singles duty with Mihaela Buzarnescu, ranked at 30.

Two-time champions France are bidding to reach the final for the sixth time and first since 2016, when they suffered a 3-2 defeat to the Czechs.

World number 21 Caroline Garcia, now back in favour after a two-year exile, leads the French team with Pauline Parmentier (world ranked 55) and Alize Cornet (58) vying for the second singles spot.

Cornet has already set the tone for the weekend by claiming France may need a "little miracle" to progress to the November final.

Comments
Topics mentioned in this article
Ashleigh Barty Victoria Azarenka Simona Halep Tennis
Get the latest updates on IPL 2020, check out the IPL Schedule for 2020 and Indian Premier League (IPL) Cricket live score . Like us on Facebook or follow us on Twitter for more sports updates. You can also download the NDTV Cricket app for Android or iOS.